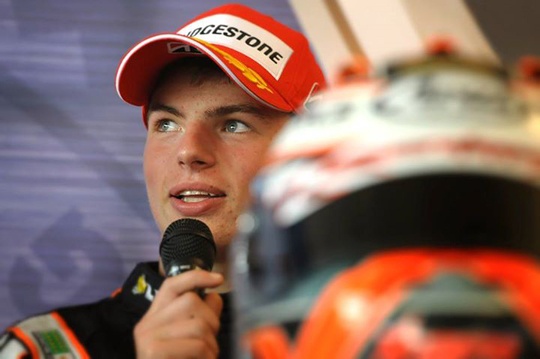 Press Release by: FIA Karting
Coming from a family of champions, the Dutchman Max Verstappen has completed an extraordinary journey in karting. At 15, he won two European titles and a world title in 2013, using his talent both in KF and KZ, an unprecedented feat in the history of the discipline.

Always faithful to CRG, followed closely by his father Jos Verstappen, Max began with two seasons in KF3, before moving to KF and KZ2 in 2012, since the beginning running at the front. But he had to wait until 2013 for his first CIK-FIA title.

"Winning the KZ European Championship will be my best memory of the season," said Max Verstappen. "I have had a lot of success since I started, podiums and victories have not been rare, but I had never been able to take a title. I felt liberated after the race at Genk: I was finally European Champion. KZ currently brings together the best drivers in the world, some with a consistent track record. But I fought against the legends of karting, I was fighting for victory and this year it was me who won!

"Alternating races in KF and KZ did not give me any particular problem. When you are in good physical condition, it takes just a few laps to find your bearings. I prefer several event championships to titles awarded on a single race. The vagaries of competition can reward a driver who was not very bright, while to win after several meetings, they must be constantly at the front.

"But I must admit that winning the KZ World Championship in Varennes was a magical moment. After Europe, we prepared 110% for the Worlds. Everything was set up for the final, the equipment worked well and the race was perfect. It's fantastic to win a World Championship with engines prepared by my own father!

"The KF European Championship was a little more difficult to win. It was not bad at Alcaniz for the first round, even though I had some problems with carburation during the final, and I finished 3rd. I did not know anything about the track at Ortona before starting the free practice at the second round. I was not the fastest, but I was able to battle at the front after winning the prefinal. The duel with Karol Basz lasted until the closing laps. Finally, Valentin Moineault won the race and me the title!

"I'm not really disappointed not to have won the KF world title, I know we cannot always be at the front. I dominated the event at PFI as my kart was brilliant in England. In Bahrain, it was immediately less well set up. We were not able to make the most of the chassis, and I did not have the performance to win this time.

"Next year, I will make my car debut in Formula Renault 2.0. Karting is over for me. I do not intend to return for a race or two. What interests me is to race, not make up the numbers. However, I have already planned to attend some karting events, because it interests me and it is a discipline that taught me a lot."