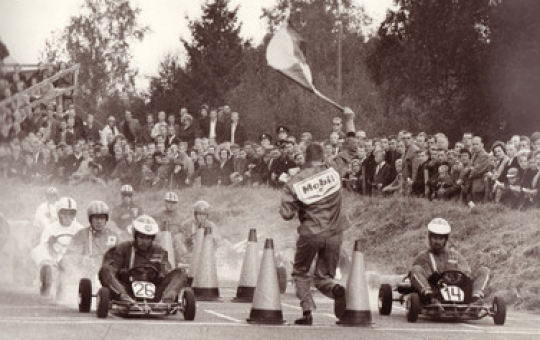 The minutes are dated 15 March 1962 and relate the debates of the Committee of the FIA (Fédération Internationale de l’Automobile) which had met three weeks earlier in Paris. This document is akin to a birth certificate… or rather a pre-birth one.

Although the FIA had already mentioned the “Karting” phenomenon in 1960 – shortly after its importation in Europe from the USA, as a matter of fact – it had not yet set up an official body to manage this budding activity. In 1961, further to an international Karting meeting held in Switzerland at Ouchy-Lausanne, by Lake Geneva, some organising clubs met in Geneva in order to create a “FIK” (Fédération Internationale de Karting), which never managed to impose real authority. There were also claims of the FIM (Fédération Motocycliste Internationale) to capture this new form of motorsport. But was there one good reason why a discipline resting firmly on its 4 wheels should be controlled by an authority dealing with 2-wheel or even 3-wheel vehicles (when it comes to the so singular sidecars)?

On proposal of the “CSI” (Commission Sportive Internationale), the FIA Committee, then chaired by Count de Liederkerke-Beaufort, decided that the control of Karting was naturally incumbent on it and, so as not to be preceded by any other body, created on a provisional basis the “CIK” (Commission Internationale de Karting) at the beginning of 1962, before it could have this specialised body ratified on the occasion of its next General Assembly, scheduled for 15 October. The bases of the actual CIK were thus set in early spring 1962 and it was Mr de Peyerimhoff who was tasked with coordinating the first work of the CIK, along with the Member delegates of the 12 countries represented at the CSI.

Hereafter are a few excerpts from the minutes of this meeting of the FIA Committee held 50 years ago, which was so determining for the CIK:

« (…)    The PRESIDENT remarks that, before discussing the core of the matter, the issue of the Fédération Internationale Motocycliste’s claims regarding the control of karting can rapidly be settled. In accordance with the current agreements, 4-wheel vehicles are taken care of by the FIA. As the vehicles in question have 4 wheels, the FIM’s claims are unfounded.

Regarding the control of karting by the FIA, the Commission Sportive Internationale has made the following proposals:

‘’ The CSI will propose to the Committee the creation, as a permanent working group, of a Commission exclusively managing the sporting control of Formula K competitions.

‘’ For the implementation period of this ‘Karting Commission’, and until a decision is taken at the Autumn Congress, it will comprise 2 delegates from each of the 12 countries represented at the C.S.I., and it will be chaired by a Member of the C.S.I. Each C.S.I. delegation will be free to send one of its representatives in addition.

‘’ The first meeting can take place next month. ‘’

Regarding the Karting Commission, the CSI points out that the two delegates who will represent each of the 12 CSI countries will not necessarily be the CSI delegates but that they can be personalities more specifically aware of karting issues, assisted if need be by one of the 2 CSI Members for their country. The meeting which will take place in early March will be chaired by Mr S. de PEYERIMHOFF. This is a provisional solution.

Mr R. BAKEN (Belgium) indicates that next October the question will be reassessed, in particular as regards those countries which will be represented within the Commission.

In answer to a question asked by the President, it is pointed out that the preparation of the Karting Calendar currently drawn up by the FIA Secretariat will be the responsibility of the Karting Commission.

As a conclusion, the Committee confirms that the control and regulation of karting fall within the remit of the FIA, which does not intend to give up this mission for the benefit of any other organisation.

The Committee approves the provisional solutions submitted to it thereon by the CSI. »