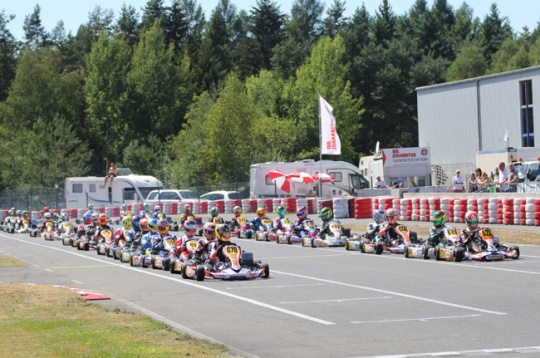 Press Release by: RGMMC
Spectators in Wackersdorf witnessed an exciting day with some thrilling action in the final races. Zak Fulk (junior), Pierce Lehane (senior), Paolo DeConto (DD2) and Igor Mukhin (DD2 Masters) celebrated the victories of the Euro Challenge comeback in Germany.
Even the championship outcome has not been decided yet, which means that the champions will be crowned during the very last race meeting at Genk (BEL) in September.

In Junior, the final was as exciting as the prefinal. Again up to ten youngsters kept fighting for the win. In the beginning it was Nicolas Schoell having the best chances for the victory. He lead the pack for quite a few laps until Fin Kenneally proved to be quickest. Yet at halftime the race was far away from being decided. Positions kept changing consistently and the fighting got tougher – unfortunately too tough: Towards the end one lost three potential winners, since Fin Kenneally, Nicolas Schoell and later on Kiern Jewiss were involved in different collisions. This was when Zak Fulk kept cool. The UK driver established himself in the lead, though there was Jack McCarthy (Strawberry Racing) following in his slipstream. On the last metres of the race McCarthy tried one last attempt, managing to be on eye level with Fulk. By a photo finish and a minimal gap of only 0.002 seconds, Fulk finally took the win ahead of McCarthy. Alex Quinn (CRG S.P.A.), who only reached the final by the second chance heat, made amends by finishing on a deserved third place, while
Tom Gamble (Strawberry Racing) and Johnathan Hoggard (KR Sport) completed the top five ranking.

In the Senior category, the final race was an almost clear matter for Pierce Lehane again. He led the race for most of the time. Only by halftime he shortly had to leave the lead to Sam Marsh (Dan Holland Racing) before he did a successful counter strike. In the end Lehane won closely but controlled, taking the maximum points for the championship. Sam Marsh followed in second place, while John Stewart (Strawberry Racing) conquered the last podium position ahead of Austria's Niki Kresse (KSB) and Rinus van Kalmthout.

In DD2, Bas Lammers did the best start for the final. Yet the Dutchman was not able to keep the lead. Paolo DeConto and Luka Kamali managed to overtake him in an early stage of the race. From then on Paolo DeConto pulled away metre by metre. In the end the Italian driver took an impressive win and saw the chequered flag more than three seconds before his chasers. Meanwhile Luka Kamali kept defending his second place against Bas Lammers, Switzerland's Kevin Ludi (Spirit Racing) and Frenchman Anthony Abbasse (Sodikart). By halftime Lammers was able to pass Kamali and the positions seemed settled. But towards the last laps, Lammers visibly lost performance. Kamali and Ludi did not hesitate and boosted themselves to the podium positions, while Lammers finished in fourth sport ahead of his teammate Anthony Abbasse.

As for the DD2 Masters Japan's Kawase Tomokazu (Uniq Racing Team) won the prefinal ahead of Russia's Igor (CRG S.P.A.) and Hungary's Geza Fodor (Ricciardo/KMS). In the final Mukhin struck back and celebrated the victory, while Fodor finished second in front of the British racing lady Tamsin Germain (DG Racing).

Now the ROTAX MAX Euro Challenge approaches the great season final. At Genk (BEL) the series will hold its last round from 31st of August to 6th of September, finally crowning its 2015 champions. So stay tuned on the official website www.rotaxmaxeurochallenge.com or rgmmcmedia.com, where you get all information regarding reports, photos, results and live TV stream.