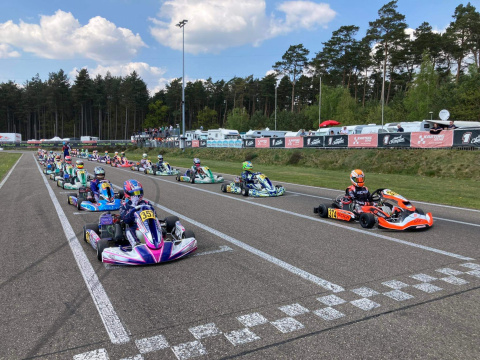 Author: Vroomkart International
The first stage of the Rotax MAX Challenge Euro Trophy has seen some really competitive track action in ideal spring weather for the many fans and viewers following the opening round at Karting Genk – ‘Home of Champions’ in Belgium.
Sunday, April 24, 2022
Photos ©Nina Megger
As always, the initial race of the season brings some new faces on the international scene, but confirms the front-runners who are on the pace. The new Rotax Project E20 Junior category also made its debut alongside the E20 Senior class.

Senior MAX
Amongst the Senior field that includes an impressive line-up of well-known Rotax champions at the RMC Euro Trophy, it was Sean Butcher (GBR) who posted the best laptime to secure pole position out of 68 drivers in Genk. The KR Sport driver won all three of his qualifying heats to ensure his place on row 1 for the first of the finals Sunday joined by last year’s Junior MAX title-holder, second-fastest qualifier, and the 2021 Rotax World #3 Kai Rillaerts (BEL) who took the honours in two of the races. Defending Euro champion, Callum Bradshaw (GBR) had one heat victory to rank P3 beside another British champion, Kai Hunter. It was the dual between Butcher (Kosmic) and Rillaerts (Sodikart-JJ Racing) that continued throughout both exciting Finals Sunday, with almost nothing separating the pair and each sharing the lead at some time in the showdown. Butcher made it a clean sweep and now holds a 10-point advantage over Rillaerts, trailed by Hunter (LN-Dan Holland Racing) who was 3rd in the day result with P4 and P3 respectively. Janne Stiak (GER) finished in 3rd in the opening Final and best lap was posted by Andrej Petrovic (SRB) in the same race.

Junior MAX
Pole-sitter Ethan Jeff-Hall (GBR) is on definitely going to beone to beat in 2022 in Junior MAX! Having won the RMCET Winter Cup in Spain and BNL Kick-off at Karting Genk in March, he added round 1 of the BNL Karting Series to his list of wins for the new season the weekend before too. Jeff-Hall kept his leading position from pole for Sunday’s Final 1, crossing the line ahead of the field in two of the races Saturday plus P2 in the last heat. Germany’s Austin Lee off the second row stormed home for a double victory to secure his place alongside the young Brit. Aron Krepscik (HUN) also had a win to rank P3, as did Vinnie Phillips who would start from grid 5. Vic Stevens (BEL) ended up on equal points with the British driver, but three top 5 results gave him the edge to rank fourth in the field of 45. The Finals kept the action coming in Juniors Sunday as the Strawberry Racing teammates Phillips and Jeff-Hall (Tonykart) took one victory each for the maximum 25 points. However, Jeff-Hall came out on top from his 2nd place in the first race and leads the series after Genk by nine points to Scott Marsh (LN-Dan Holland Racing), who took P3 and P2, now on the same points as Phillips in P3. Tommie van der Struijs crossed the line in 3rd in Final 2 and also set the fastest lap.

Rotax DD2
Local DD2 star Xander Przybylak knows the Genk circuit just as well as many who have grown up at the ‘Home of Champions’, so it’s no surprise the former 2-speed championset the pace Friday and took the victory in two heats. Although, another Belgian-born driver Xen de Ruwe (SLO) was quickest in Group 2 of the official timed practice and stole the glory from his younger rival in one of the races to rank second for a front row start in Final 1. Meanwhile,Laurenc Seifried (GER) was P3, on equal points after a front fairing penalty hampered De Ruwe’s last race, and Philipp Moitzi (AUT) ranked 4. The DD2 Finals were really intense, in a class that comprised so many highly-accomplished Rotax competitors. Przybylak (Tonykart-Bouvin Power) took the chequered flag in Sunday’s first race to start on pole again in the late afternoon with the defending title-holder Petr Bezel (Sodi-KSCA Sodi Europe) sharing row 1 after taking 2nd then the reigning Rotax Senior MAX champion from the RMCGF in Bahrain, Mark Kimber (Strawberry Racing), finishing in 3rd. With his goal to add the DD2 title to his portfolio, Kimber set the pace in Final 2 and claimed a comfortable win with a gap of 4.5 seconds over 2021 RMCET runner-up Jakob Bezel and Frenchman Nicolas Picot (Tony-Daems Racing Team).Kimber now leads the series by only three points over Przybylak going into the second round in France, with Petr Bezel in 3rd also with a three point buffer to his brother Jakob.

DD2 Masters
Two German drivers were at the head of the DD2 Masters field where Michael Becker topped the timesheets by 0.030 from ex-national champ Denis Thum, but it was Thum who sealed two victories in the heats for Final 1 pole over his compatriot, who won the initial race. The fastest Belgian baker, Carl Cleirbaut, finished with a best result of 2nd for P3 and then it was Thierry De Jong (NED) whose 3rd place kept Bruno Dos Santos, on the same points, from starting the first Final on row 2. When it came to the Finals, Denis Thum (LN-Kraft Motorsport) was fast and unbeatable, showing his elation as he savoured the victories. Becker (Compkart) was 2nd and 3rd, giving him P2 in the points overall, while Christophe Adams (NED-Sodi) came home to take 2nd in the last Final and now sits just a few points behind Becker. Cleirbaut (KR-SP Motorsport) ranks 4th having finished P3 and P4 Sunday.

Mini MAX
With a field of 33 youngsters in Mini MAX, there were some amazing nose-to-tail battles across the weekend. Pole position went to Paul Schoen (KR-MH Racing) Friday and then the Swiss driver won two heats, after one disappointing result in race 1. It was Boaz Maximov (Tonykart-Bouvin Power) who claimed the first victory in both the heats and the Finals at Genk, together with a 2nd place behind Schoen in the last Final that basically wrapped up the event for the Dutch driver, also awarded his entry ticket to the RMC International Trophy in Le Mans this July. Toms Strele (LAT) ranked P2 following the heat races ahead of Max Sudurski (NED) and finished a close 2nd to Maximov in Final 1, with Rory Armstrong coming in 3rd. In the last Final, it was Felipe Reijs (KR-SP Motorsport) starting on grid 6 who took P3 and likewise, ranks  3rd in the series behind Maximov and pace-setter Schoen, on equal points with Armstrong 4th.

Project E20 Senior
Qualifying practice was led by Eric Le Moine (FRA) in the #701 E-Kart just 0.028 seconds the gap to Austria’s Corinna Kamper and 2021 RMCET vice champion from the USA Ellis Spiezia (GER); each then taking victory in the three heats to maintain the same order in the ranking.
A technical issue forced Kamper to be excluded from Final 1 after leading, but it was Luca Koester (GER) who capitalised on the situation to beat Spiezia to the flag ahead of the Frenchman. This result was repeated in the next Final and the Kraft Motorsport driver took a convincing win to be on the top step of the podium. Spiezia was P2 overall ahead of Le Moine, Hector Constant Ramirez and Jose Luis Hurtado completed the first five.

Project E20 Junior
Thijs Stevens (NED) was the well-deserved winner of the weekend in the new E20 Junior class with a dominant performance from qualifying to the finals.
Krit Knooren (NED) and Kacper Turoboyski (POL) ranked in the top three in the timed practice. When it came to the racing, Tijs Daems finished twice in P2 in the heats and the finals, which meant the Belgian would secure 2nd place on the day. Daniel Hauswirth was 3rd overall in the points, in a close race for positions ahead of Turoboyski and Knooren in P5.

Both Rotax Project E20 class winners have another opportunity to compete at one of the additional E20 Tour 2022 ‘Arrive & Drive’ events as part of their prize at the RMCET in Genk.

Find more information plus all the links to results and race videos from the RMC Euro Trophy at Karting Genk on the official event homepage - www.rotaxmaxchallenge-eurotrophy.com

The next round of the RMCET takes place at a new venue to the championship, Val d’Argenton in France from May 27-29, 2022.