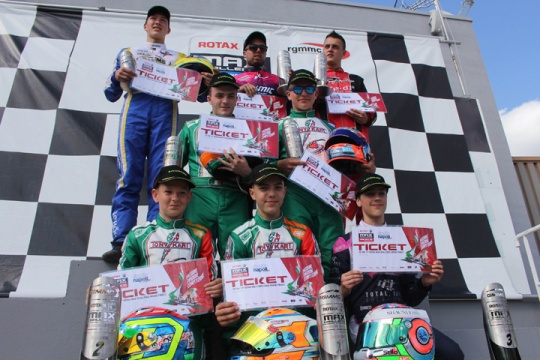 Press Release by: RGMMC
The 13th season of the ROTAX MAX Euro Challenge is history: In Salbris Europe's popular ROTAX Series held its last round of the 2016 season. After races in Belgium, Italy and Spain, the Euro Challenge ended this year's tour in France from August 24th to 28th 2016.
On the 1.495 metres long track of Sologne Karting in Salbris, temperatures of more than 35°C put everyone to the test and turned the circuit into a real melting pot. Keeping cool was the key to success for the big showdown in the categories of junior, senior and DD2. Although some categories were already decided during the penultimate event at Zuera, the champions were crowned on French soil officially. Moreover the battle for vice titles and the hard-fought ROTAX Grand Finals tickets guaranteed some thrilling action for the big finale.

While the designated junior champion Axel Charpentier (Strawberry Racing) did not start for the final round, his teammate Mark Kimber (Strawberry Racing) stepped into the breach for him. By a time of 1:02.470 minutes the vice championship aspirant was more than two tenth of a second faster than Dutchman Dylan Buys (JJ Racing) in second spot. Local hero Enzo Valente (Pascal Valente) seized his home advantage and boosted himself in third place. Lucas Dunner (JJ Racing) from Austria and Jean Nomblot (Nomblot) from France completed the top five positions after the qualifying, which timed 22 drivers within one and the same second. For Olli Caldwell (KR Sport), who still had a realistic chance for the runner-up position in the championship, the qualifying did not go according to plan. He ended up on 17th place only.

Dylan Buys was the dominant man in the heats. The Dutchman took the reins by a clean record of three wins gaining the pole position for the prefinal on Sunday. Friday's quickest Mark Kimber lost a little bit of ground but still was fast enough to manage a good second place in the heat ranking. Third place went to Jean Nomblot ahead of Lauri Leppa (Vaisanen Hekki) from Finland in fourth place. A big improvement had to be attested to Olli Caldwell. After a topsy-turvy qualifying the Brit jumped from 17th to fifth position.

Closely before the prefinal start, a surprising small summer rain shower made for a slippery tarmac. That changed the conditions for the slick tyre equipped field completely and shuffled the ranking in the first stage of the race distance. One who obviously felt comfortable on the slippery – and later on drying – ground was local hero Enzo Valente. Having picked up the race from sixth place, he established himself on the top quite early and managed to defend it up to chequered flag. Yet that was no walkover for the Frenchman, who crossed the line by a small winning margin of only 0.074 seconds ahead of pole sitter Dylan Buys. Third place went to Lukas Dunner who had started the race from tenth place only, while Germany's Tamino Bergmeier (JJ Racing), coming from twelfth place, finished fourth ahead of Jean Nomblot. The vice title aspirants Mark Kimber and Olli Caldwell dropped back to seventh and twelfth position, respectively, which did not settle the runner-up position for the championship yet.

Enzo Valente was the one setting the pace in the beginning of the final, but soon Dylan Buys made his way to the top. In the following, he headed away metre by metre and won the race by a gap of more than seven seconds. Valente on the other hand, was able to defend the second position, which was not easy at all, since up to five opponents kept pressuring from behind. In the end Mark Kimber saw the flag in third place saving the vice championship. Jean Nomblot followed in fourth place in front of Olli Caldwell who complemented the top three of the championship.

In the senior category, Nicolas Schoell (Strawberry Racing) already conquered the champion's crown at Zuera and only a potential exclusion in Salbris could have endangered his overall win, which is why he skipped the last round, leaving the way to his opponents: The first benchmark was set by Lars Lamborelle (Dan Holland Racing). The Dutchman drove a time of 1.01.293 minutes and was only 0.066 seconds quicker than Gary Donnelly (Strawberry Racing) who underlined his ambitions for the vice championship. Turkey's Berkay Besler (Bouvin Power) followed in third place ahead of Frenchman Adrien Renaudin (Patrice Renaudin). Belgium's Glenn van Parijs (Bouvin Power) – another candidate for the vice title – complemented the top five positions, while the reigning vice champion Rinus van Kalmthout (RR Racing) had to be satisfied with seventh place behind Jordan Brown-Nutley (Dan Holland Racing).

The heats were actually in the hands of Berkay Besler and Gary Donnelly. Both distributed the race wins. Nevertheless, none of them made it to the top in the heat ranking. Both experienced at least one incident in the course of the heats. As a result, Besler had to be satisfied with sixth place in the intermediate classification while Donnelly even dropped back to twelfth place. On the top Lars Lamborelle established himself: Without a win, but therefore with most consistent results, he defended the pole position. Behind, Russia's Denis Mavlanov (Bouvin Power) gained the second place ahead of Adrien Renaudin. Fourth place went to Glenn van Parijs in front of last year's junior champion Jack McCarthy (Strawberry Racing). In seventh place Rinus van Kalmthout maintained his chance for the vice champion's crown.

In the prefinal, Lars Lamborelle showed a strong performance again. But at first the Dutchman had a moderate start into the race, making him watch Denis Mavlanov and Rinus van Kalmthout sharing the lead for the majority of the distance. But as the race approached the end, Lars Lamborelle caught up and regained the top, being able to defend it up the finish line. Denis Mavlanov followed in second spot ahead of Rinus van Kalmthout, while Jordan Brown-Nutley and Berkay Besler completed the following positions. After the race Rinus van Kalmthout received a time penalty, which threw him back to twelfth place, losing the vice title to Gary Donnelly (Strawberry Racing) who had finished the race in sixth spot.

The final seemed to be a clear matter for Lars Lamborelle again. But soon Adrien Renaudin, who came from fifth place, was at his heels. The duo pulled away from the grid and arranged the win amongst themselves. In the last lap Renaudin made a successful move but Lamborelle counter attacked only a few metres later and took the win ahead of the Frenchman. Third place was decided on the last metres, too. Here Jordan Brown-Nutley made it onto the podium ahead of the new vice champion Gary Donnelly and Swedish girl Jessica Backman (Daems Racing). Josh White (Coles Racing) who finished the finals in 14th and seventh place, completed the top three of the championship podium.

The situation in the DD2 category could not be more exciting: After the Spanish round at Zuera, the championship changed dramatically and became really close: By his double triumph Hungary's Ferenc Kancsar (VPDR) had improved to second place in the table. Equally Kevin Ludi (Spirit Racing) had conquered the top again. The Swiss came to France with a leading gap of only 12 points ahead of Kancsar, which was not much with regard to the drop-score-system. Constantin Schoell (Daems Racing) from Austria was not in the position for the total triumph any more, but still had a theoretical opportunity to win the vice championship.

In the beginning Constantin Schoell was the driving force in the qualifying. The man from Austria set the best time of the day by 59.844 seconds. Over a tenth of a second behind followed Frenchman Alexis Coursault (Coursault) who established in a promising second place on home soil. Abdullah Al Rawahi (BirelART Middle East) from Oman impressed by a strong third place being even quicker than both championship rivals: The title candidates Ferenc Kancsar and Kevin Ludi completed the ranking in fourth and fifth spot, an exciting clash for the upcoming heats on Saturday.

In the heats, Constantin Schoell tied in with his performance from Friday. He celebrated two wins and took another third place, which eventually made him defend the top. Second place went to Dzianis Slavinski (Dan Holland Racing) from Belarus, who made a great job. After being seventh in the qualifying he improved remarkably – even winning one of the three heat races. Alexis Coursault followed in third spot ahead of championship leader Kevin Ludi and Italy's Cosimo Durante (Franco Durante). Title defender Ferenc Kancsar suffered a small Waterloo. In the first heat a collision forced him into the pits, which he could hardly compensate by an eighth and seventh position in the subsequent races. Ultimately he ended up in tenth place in the heat's merge.

In the prefinal Constantin Schoell managed the best start. Yet the Austrian could not keep up his pace. He had to leave way to championship leader Kevin Ludi. The Swiss drove in his own sphere and took the lead soon. Being the fastest man on track, he controlled the race and saw the chequered flag first, marking his most important win ever, for it equally meant the total triumph in the championship at last. Constantin Schoell finished the prefinal in second place ahead of the beaten title defender Ferenc Kancsar. The latter fought hard but finally his remarkable third place was not enough to stop Ludi in the overall ranking, especially not since Kancsar got a subsequent time penalty, which made him drop back to seventh place. As for the further positions, Finland's Ville Viiliainen (Vaisanen Heikki), Austria's Mick Wishofer (VPDR) and Cosimo Durante moved up and took positions three to five in the prefinal.

The plot of the final is told shortly: Kevin Ludi retired from the final, so as not to endanger his overall win by a potential exclusion. Thus Constantin Schoell seized his chance and celebrated a clear start-finish-win, which rewarded him the vice title in the end. Behind the Austrian, Ville Viiliainen took a secure second place ahead of Dzianis Slavinski, Cosimo Durante and Mick Wishofer. Due to used tyres Ferenc Kancsar dropped back to twelfth place only, which eventually made him drop back to third place in the championship.

In the DD2 Masters category Slawomir Muranski (Wyrzykowski Motorsport) had a solo. He was the only Masters driver at Salbris and consequently won the event unrivalled. Yet his start granted him enough points to take the runner-up position in the championship.

Although this year's season of the ROTAX MAX Euro Challenge is over now, there is one more major event promoted by RGMMC: The ROTAX MAX International Open will be held from 5th to 9th of October 2016 on the modern karting circuit of the Adria Raceway. This special event in Italy offers the last six tickets to the ROTAX MAX Grand Finals at Sarno (ITA). More information regarding reports, photos, results and live TV stream are available on the official websites www.rotaxmaxeurochallenge.com or www.telemundi.com.