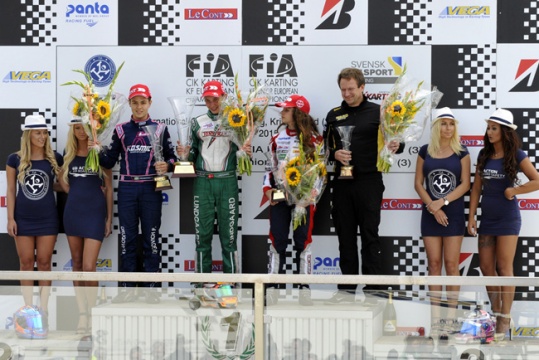 Press Release by: WSK
The European champions are Hanley (GB – Croc-TM KF) and Lundgaard (DK – Tony-Vortex KFJ). Next week, special report on Motors TV.
Asum Ring, a breath-taking European Championship
The finale of the European CIK-FIA Championship couldn’t have been more exciting than this. The event, hosted by the Asum Ring facility in Kristianstad (S), was reserved to the KF and KFJ categories: the names of the new 2015 European Champions of the two international categories were decided at the last bends of exceptionally heated races. The winners of the two Finals were Marcus Armstrong and Christian Lundgaard (both on Tony Kart-Vortex-Vega): it was after their victory that the British Ben Hanley (Croc-TM-Vega) became the new KF Champion, while in KFJ it was the Danish Lundgaard who, thanks to his victory in the last round, grabbed the title. The Swedish weekend was full of surprising and unpredictable events which will be recapped in the special report on Motors TV next week.

Armstrong incredible winnner, while Hanley is the new KF Champion
Marcus Armstrong (Tony Kart-Vortex-Vega) was the protagonist in KF: he had a spectacular off-track excursion on Saturday with no consequences, he closed the gap in the Prefinal and accomplished the recovery mission in the Final, winning the race. The driver from New Zealand started from the third row and battled for the top positions against the British drivers Ben Hanley (Croc-TM-Vega) and Tom Joyner (Zanardi-TM-Vega), the Danish Nicklas Nielsen (Tony Kart-Vortex-Vega) and the American Juan Correa (Energy-TM). This group of five was then reached by the Dutch Richard Verschoor (Exprit-Vortex-Vega) and the German Hannes Janker (CRG-Parilla-Vega), all eager to push hard. With Nielsen out of the games, eventually, it was Armstrong who won ahead of Verschoor and  Joyner. This result, however, didn’t help Joyner in his attempt to climb the standings: the winner of the Championship isBen Hanley, the new European Champion.

Lundgaard beats the odds and wins the KFJ title
Christian Lundgaard (Tony Kart-Vortex-Vega), in the final phase of the round, recovered the positions he had lost in the Heats: the poor result he scored in one of yesterday's races prevented him from starting from a good position. Thanks to his win in the Prefinal 1 this morning, Lundgaard immediately laid his cards on the table: he aimed at the Title even though he trailed by a rather ramarkable amount of points from the current leader, Kenny Roosens (Kosmic-Parilla-LeCont). The Belgian, anyway, did not take part in the Final, where
Lundgaard took an early lead. The driver of the Ward Racing team won race and Championship. Marta Garcia (FA Kart-TM-LeCont) nearly scored the second position, but the Brazilian Felipe Drugovich (Cosmic-Vortex-LeCont) overtook her on the last lap and became the runner-up. Garcia placed third. Roosens only placed third in the Championship, leaving the second position to the Indonesian Presley Martono (Tony Kart-Vortex-LeCont).