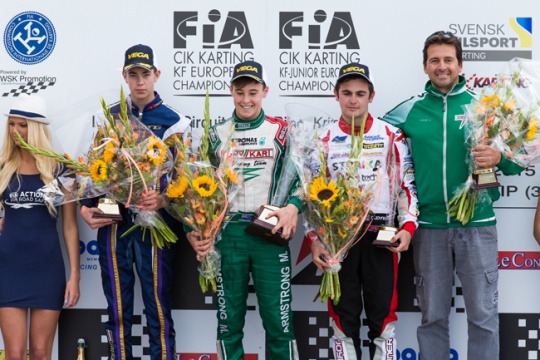 Author: Vroomkart International
The Tony Kart driver finds a fantastic win in the final, as Hanley is crowned 2015 European Champion.


After an initial tussle between the two main title contenders Hanley and Joyner, the two got lost few positions with New Zealander Marcus Armstrong grabbing the lead. The British duo then got past also by Verschoor, who went on to claim 2nd (and 3rd in the championship), as Hanley dropped further down also past by Janker and Tiene, who was later excluded for bad manoeuvre.
With Armstrong celebrating his first major international victory and Joyner only finishing 3rd, Hanley dropped the result as his worst to grab a truly deserved European crown with 65 points over Joyner.