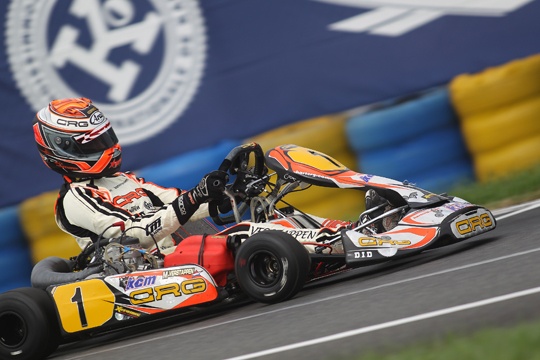 Lonato del Garda (Brescia). The success obtained in Varennes sur Allier (France) with Max Verstappen, gives CRG the record of CIK-FIA world titles won as the Italian firm won 39 World Championships and World Cups since its debut in 1984, when CRG entered in the sportive management of the legendary Kalì-Kart, the famous brand of ’70s, before the complete acquisition that came in 1986.

The new record of 39 world titles was obtained thanks to a strong team work that CRG accomplished once again in the World Championship recently held in Varennes, with the accurate preparation of all technical components and the synergistic support of drivers and mechanics that have always worked with one objective in mind, the only one that a great team like CRG has every time it gets on track: victory!

The updated version of the chassis Road Rebel – for many years now on top of national and international KF –  turned out to be very quick, well balanced and performing in every moment of the French weekend which put CRG drivers in the best possible condition to be protagonists in this important appointment – the most important one for the category with the shift.

11 TITLES WON IN THE CATEGORY WITH THE SHIFT.  Thanks to the most recent success obtained in KZ with Max Verstappen, CRG is currently holding another record as the Italian firm has won more world titles in the category with the shift than anyone else. In total the titles sum up to 11 including World Championships and World Cups, 10 of which in the highest category: another record figure for a constructor.

THE YOUNGEST CHAMPION: 15 YEARS AND 357 DAYS.  The victory obtained in Varennes last September 22nd brought another record to CRG and Max Verstappen. The son of former F1 driver Jos Verstappen – who prepares TM engines for Max – was born in Hasselt (Belgium) on September 30th 1997 which makes him the youngest driver ever winning the title of World Champion in the highest category with the shift at the age of 15 years and 357 days!