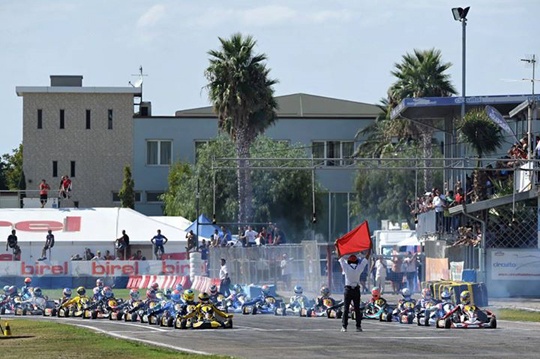 Press Release by: FIA Karting
A class full of vigour like it's young competitors, KF Junior will attract 84 drivers from 2 to 6 October 2013, for the first race of the World Championship, at the International Circuit of Sarno near Naples.

With an entry including most of the world specialists, Italy is preparing to host one of the most interesting events of the season, especially as there are 26 drivers involved in the KF International Super Cup which complements the program.

A very fast, yet technical circuit, Sarno is a track that is as demanding for engines as for the chassis, and has been the scene of many international competitions which are always spectacular. With 84 entered, 28 countries and five continents represented and almost all of the seeded drivers from the European Championship, this global competition will be convincing. Italy and Finland are the two nations with most drivers present, while chassis from the OTK group are used by more than two thirds of the field.

Like the older drivers in KF, the KF-Junior competitors will then decide their world title at the second event in Bahrain from 20 to 23 November.

The meeting will be completed by the CIK-FIA International Super Cup for KF where some of the best drivers will compete one last time this year on the European continent. With headliners like Nicklas Nielsen (Kosmic-Vortex-Vega), Dorian Boccolacci (Energy-TM-Vega), Lance Stroll (Zanardi-TM-Vega), Tom Joyner (Zanardi-Parilla-Vega), Karol Basz ( Tony Kart-Vortex-Vega), the Asia Pacific Champion Julien Fong Wei Jie (Tony Kart-TM-Vega), or the return of Czech Libor Toman (Birel-TM-Vega), the competition is unlikely to lack interest.