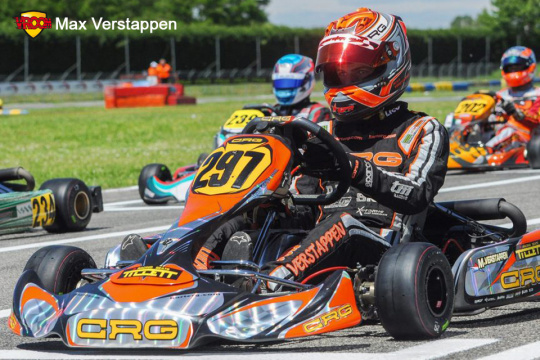 Press Release by: CRG Racing Team
The International Karting is about to live a great appointment in Varennes with the KZ World Championship and the KZ2 Super Cup. The long prize list CRG features so far 9 world titles in the category with the shift, starting from the one won in 1984 by Gabriele Tarquini up to the most recent one won in 2011 by Jonathan Thonon.
One of the most important events of the year is at the starting blocks, certainly it is the most important appointment for the category with the shift, i.e. KZ. This coming weekend the Circuit Jean Brun of Varennes sur Allier will house the KZ World Championship, the new KZ2 International Super Cup and the last round of the Academy Trophy.

The KZ World Championship will be run in one round only and it is going to be the title that CRG will be hunting with all its forces and its best drivers aiming to bring home this prestigious trophy once again. The prize list of the Italian firm dates back to the distant 1984 when Gabriele Tarquini got the title in the category that was once called Formula C.

The Belgian champion Jonathan Thonon will be again in the ranks of CRG's works team at the wheel of the faster and faster CRG chassis pushed by a Maxter engine unit prepared by Tec-Sav. He will certainly be a protagonist in this world championship and certainly one of the major contenders to the title.

The four times world champion will find quite a strong rival in team mate Max Verstappen, the Dutch “enfant prodige” fresh winner of the KZ1 European Championship and of KF will take part in this round strongly motivated to score a remarkable hat-trick on the CRG chassis powered by TM.

CRG's army in Varennes sur Allier will be completed by Felice Tiene (CRG-Maxter), who is at the debut in the KZ world championship after winning last year the KF2 World Cup, Jordon Lennox-Lamb (CRG-Parilla), who is the current holder of the KZ2 World Cup and then, last year's KZ1 European title winner Jorrit Pex (CRG-Tm), 2011 KZ2 European Champion Fabian Federer (CRG-Maxter), and finally Davide Forè (CRG-Tm), who won the title in this category in 2006. These are all first class drivers that will hunt for the victory in a weekend that announces to be really exciting.

CRG TO COMPETE ALSO IN KZ2. In KZ2 CRG colors will be defended by Giovanni Martinez and by the Belgian driver Xen De Ruwe, both on CRG-Maxter in the International Super Cup. On top of that a lot of private drivers chose to compete with CRG chassis in this championship.

In fact, CRG chassis will be the most used one in Varennes: 27 entered drivers will compete on a CRG chassis, 9 in KZ1 and 18 in KZ2, which sums up to more than 20% of all participants.