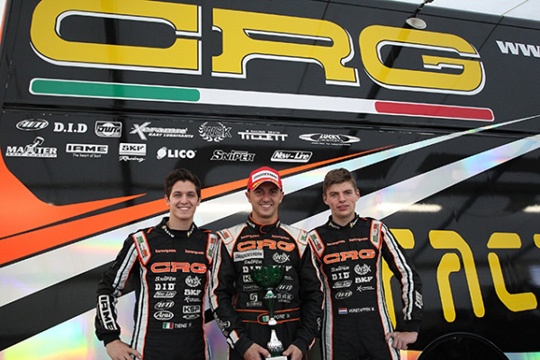 Press Release by: CRG Racing Team
Davide Forè in the middle between Felice Tiene (on the left hand side) and Max Verstappen, on the Superpole's top three in the World Championship of Varennes in KZ2. (Ph. CRG Press)

CRG drivers scored an awesome triplet in the qualifying of the only round of the World Championship currently underway in Varennes with Forè quickest, leading Felice Tiene and Max Verstappen. Jordon Lennox-Lamb and Jonathan Thonon very close to the front runners. Very good performance for Xen De Ruwe and Giovanni Martinez in KZ2.

Varennes sur Allier (France). The KZ World Championship in France started under the mark of CRG with a triplet in the Superpole made by Davide Forè (CRG-Tm), Felice Tiene (CRG-Maxter) and Max Verstappen (CRG-Tm).

The three color bearers of CRG, split by only a tenth of a second,  secured the virtual podium so far on the very fast circuit Jean Brun of Varennes sur Allier. Their performance was therefore virtually identical while beating all the rivals in this Friday dedicated to qualifying of the World Championship.

Davide Forè, four time World Champion and three times winner of the World Cup, set the pace in 51”625, Felice Tiene was just 41 thousands shy of him and Max Verstappen 93.

FORE’S JOY. Huge satisfaction for Davide Forè. “I am really satisfied today – commented a bright Forè after his fastest lap –  especially as I went through hard times in the past few months and I managed to get out of it as shown by today's performance. I would like to thank CRG boss Giancarlo Tinini, who kept his faith in me allowing me to race with team DTK in a programme parallel to that of the works team. Thanks also to Bruno Daldosso for preparing the TM engine and to my mechanic Gionata too. I hope to keep this momentum also on Saturday for the heats and particularly on Sunday for the Final.”

The other CRG drivers are not that far either. Jordon Lennox-Lamb (CRG-Parilla) set the fastest time in the qualifying proceeding the Superpole and then obtained the tenth place only two tenths shy of the leader, while Jonathan Thonon (CRG-Maxter) had a little technical inconvenience and could not partake in the Superpole slipping down to P13 with a laptime of 52”102.

A bit more to the back for the moment Jorrit Pex (CRG-Tm) is 25th in 52”550, while Fabian Federer (CRG-Maxter) was forced to stop during the first lap of qualifying due to a technical problem.

KZ2 qualifying heats took place in the first day of Varenne's weekend and they will continue on Saturday together with the heats of the “king” category KZ. Among CRG works drivers the young Belgian driver Xen De Ruwe (CRG-Maxter) put in a good performance despite coming from Rotax's DD2 – where he raced and win –  but showed to have a good feeling with this very different and more competitive KZ2. De Ruwe set the 16th time in qualifying while the other CRG works driver Giovanni Martinez (CRG-Maxter) ended in a good 27th position out of the 86 entered drivers.