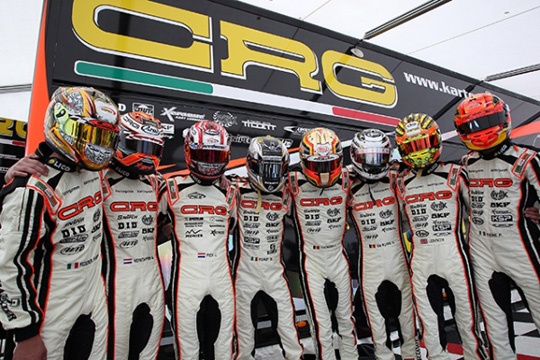 The await is mounting for the two Pre-finals that will decide the starting grid of the Final of the CIK-FIA KZ World Championship scheduled on Sunday at the circuit Jean Brun of Varennes sur Allier. After the exploit in qualifying of CRG drivers, qualifying heats awarded specially the efforts of Verstappen, Tiene, Forè and Lennox. Thonon ended to the back due to an incident, alike Pex and Federer.

Varennes sur Allier (France). CRG always on top after the very tight qualifying heats in the KZ World Championship to be run on Sunday September 22nd on the very fast but also quite challenging circuit Jean Brun of Varennes sur Allier, where the very good performance of CRG works drivers is continuing relentlessly.

After the encouraging exploit in practice on Friday with the CRG one-two-three scored by Davide Forè, Felice Tiene and Max Verstappen, on Saturday's heats the Dutch driver led the operations for CRG with a victory and a second place in the two heats run. Only Marco Ardigò managed to do better than Verstappen with two wins but the starting grid of the Final on Sunday afternoon will be decided by the two Pre-Finals run in the morning that will be crucial in the definition of the final starting grid.

VERSTAPPEN, TIENE, FORE’ AND LENNOX ON TOP.  Max Verstappen commented the two heats held on Saturday full of hopes on his chances in this way: “The first heat was OK for me, I tried to save the tyres a little bit but I pushed hard and I finished first  so that was good. In the second heat, everybody from the other side of the grid had newer tyres than me and I closed second but I made the same time as the winner. We did some little changes and the engine was not so good as before but it should be good for me tomorrow.”

The – not so surprising – surprise of this World Championship is represented by Felice Tiene, who has always been very quick in practice and in the race; in the heats he harvested a second and a fourth place (setting also the fastest lap). His comments on the first participation in the KZ World Championship follows: “Heats have been quite tough but we have the speed and this is what counts. The Maxter engine prepared by Savard is very good, I still have to improve a bit the chassis setup though but I am very happy. I count on getting a good result.”

As regarding the two Pre-Finals, Max Verstappen will start his race on pole, Felice Tiene from the front row. Good result also for the other CRG drivers. Davide Forè, will start his Prefinal from the third spot of the grid and Jordon Lennox-Lamb, also third on the grid. This is to say that everything is still possible!

Back start for Jorrit Pex, 19th absolute due to an incident, Fabian Federer, 25th due to some contacts and Jonathan Thonon, will start 31st as he had an incident with Lammers in his first heat and was afterwards slowed down by some carburator problems in the second, where he still set the fastest lap anyway! In other words, let's wait for tomorrow... recovers are not impossible on this track!

In the International KZ2 Super Cup International CIK-FIA, the young Belgian driver Xen De Ruwe, and the other CRG driver Giovanni Martinez run very good heats even if the were a bit unlucky in some circumstances. Tomorrow's Pre-finals will be crucial also for them.