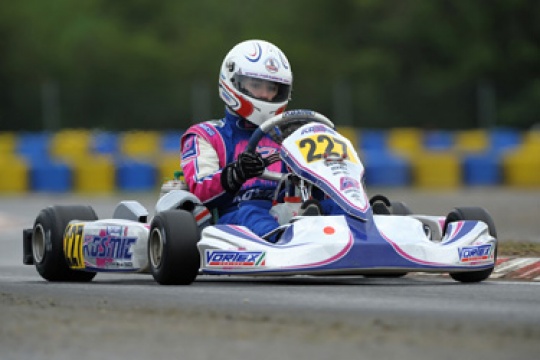 There are time when the weather Gods play havoc with the karting drivers. The 105 competitors entered in the European KF3 Championship e (13-15 years) held this weekend at Varennes-sur-Allier, in France, during their two days of qualifying practice sessions had to take on a regularly water drenched track. However once the weekend’s first important moment arrived, namely this Friday’s end of the day qualifying sessions, they were able to take to an almost dry track.

« This is crazy! », a driver mumbled just a few minutes before taking to the track for the qualifying sessions. « Since our arrival here we haven’t been able to fit our slick tyres. And the first time we have been able to do this is in fact for the one and only qualifying session, which is quite crucial for a meeting such as this one. This is going to turn into a pure lottery! »

Having been fortunate to take part in the final series, just when the track was at its fastest, Giuseppe Gagliano (Kosmic-Vortex) took everyone by surprise by clinching pole position. A brilliant performance for this 14 year-old Italian driver, who was given the opportunity to compete in the European KF3 Championship having won the Rok Talent Award in Italy, organised by Vortex. But Giuseppe is fully aware that these qualifying sessions are only a small part of the long road to being one of the 34 finalists who will be called upon to compete in the two championship races scheduled on Sunday afternoon. Split into seven groups based on the qualifying results, these 105 drivers will each in fact need to take on no less than 6 Qualifying heats. Overall spectators will in fact enjoy 21 Qualifying Heats prior to the final phase on Sunday.

It goes without saying that the hierarchy will undoubtedly evolve during these Qualifying Heats. We expect to see certain favourites such as the Italians Alessio Piccini (Kosmic-Vortex, 12e) and Luca Corberi (Kosmic-Vortex, 18th), but also the Brit Callum Ilott (Zanardi-Parilla, 20e) or event the Croat Martin Kodric (FA Kart-Vortex, 30th) come up through the ranks. There’s an even more arduous task ahead for two of the drivers noted as future candidates for the title; the Frenchman Dorian Boccolacci (Intrepid-TM, 43th) or the Canadian Lance Stroll (Zanardi-Parilla), only ranked 67th and now obliged to work his way up during these Qualifying Heats

There was a major deception for the Belgian Romain De Leval (Kosmic-Parilla), who had registered the best time in his series prior to being excluded due to a non-compliant intake duct. He will also need to produce miracles to lay claim to a place in the Final. He might perhaps be able to count on the weather Gods, who might add their pinch of salt during the coming two days… It goes without saying that a big show will be on hand this coming Saturday and Sunday at Varennes-sur-Allier for the first of the two meetings of this European KF3 Championship!


Discover all information of the European KF3 Championship on www.cikfia.com or via the link http://www.cikfia.com/championships/cik-calendar/2012/varennes/event-guide.html