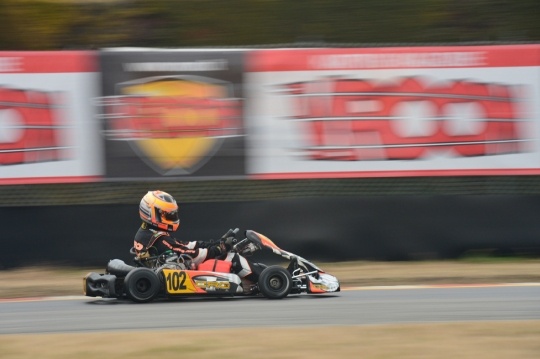 Author: Vroomkart International
Lonato (10 March) – The drivers presentation ceremony, with 180 drivers on the home straight, opened the final stage greeted by warm sunshine. Oddino Domenichini gave a beautiful speech in remembrance of Andrea at the presence of Andrea’s mother Patrizia and the Pellegrini family, in charge of organizing the Trophy since 1991. In his speech, Domenichini underlined that this event has been the first to break in the international karting scene, attracting the world’s best kart drivers, just like a world championship. And so it was that the Margutti was nicknamed ‘Mondialito’. On the occasion, former World Champion Danilo Rossi gave a brief speech in which he emphasized the importance of so many drivers still participating in this event despite the difficult times karting is going through, besides the importance of being crowned the final winner.
In the cover Habulin.


60 Mini Prefinal
Cicognini powers off, Martinez in trouble
Already in the formation lap Martinez showed problems. Cicognini grabbed the lead at the start pulling away few laps later. Behind him Vidales was the best of the rest, while a three-kart train fought hard for row 2 with Colombo coming back from 12th on starting grid has the better of Mizevich and Cobellini. Abrusci ran short of luck in the early stages dropping several positions and closing 8th at the flag.
KFJ Prefinal
Aubry pulls away
The French driver sneaked in Sitnikov before the end of the first lap to lead the group. The Russian shadowed him but had to fend off the attacks from Norris, who moved past him allowing Aubry to pull away in the meantime. The two would switch position several times, but the Russian grabbed row 1 start ahead of Daruvala, Ticktum, Norris and Alessio Lorandi.
KZ2 Prefinal
Habulin unbeatable
Giulietti took advantage of Habulin’s hesitation at the start to grab the lead. But the Croatian wasted no time and took it back right away dominating the race. Giulietti tried to stay with him but lacked something in the final stages and had to give in to Dante and Lundberg. Good performance also by Tilloca who ends in 5th.
KF Prefinal
Corberi over Boccolacci
The race was tainted by a race accident that involved driver Martin Kodric and a member of the medical personnel while crossing the track.
It all happened before the end of the first lap when a first aid staff crossed the circuit unaware of the approaching group of drivers led by Boccolacci. The French driver managed to slide past the imprudent medical staff as opposed to Kodric who could not avoid the impact. Thankfully, besides few bruises, the member of the medical staff was unharmed, but a blameless Kodric found himself out of contention for the final win.
The upset of Kodric team Ricky Flynn Motorsport with Race Direction turned into a sidetrack heated quarrel while the race went on with the Slow sign out for an unprecedented 10 laps. Undoubtedly, the accident compromised the race of the Croatian. After the race resumed, Luca Corberi managed to defend well from the pressing attacks of Boccolacci at the chrono tower corner.
60 Mini Final
Cicognini has no rivals
With Martinez well behind the leading group, Cicognini found no rivals and dominated the final. Behind the fight is all for 2nd place between Vidales and Colombo, with the former dropping down the field in the heat of the battle. Mizevich took advantage of it, but the Italian came back up in the later stages to grab the runner-up title. Martinez pulled off a good comeback but it was just not enough to grab the final podium position.
KFJ Final
Tickum at the last lap
The race seemed decided already after the very heated first lap. Aubry kept the lead at the start building a big margin over Tickum, Daruvala, Lorandi and Sitnikov. But the 20-lap race was only at the beginning when Ticktum started to make up ground on the French leader, managing to shadow him in the final few laps, followed by Sitnikov, the fastest driver on track. And just before the chequered the duo managed to move past the French, with Lorandi and Daruvala completing the top five.
KZ2 Final
Habulin impeccable
Habulin had a good start, but at the turn near the paddock Lundberg muscled his way through to the lead.  Habulin didn’t rush his move waiting for the best opportunity while keeping Dante at bay. Came lap 5 and Habulin moved to the lead, while Bonetti and Tilloca proved to be very fast lapping below the 42” mark. The Croatian powered by Modena Engines wasn’t able to pull away tailed by Dante and Lundberg all the way, and from lap 19 he managed to lap consistently into the 41”9 grabbing the win. An impeccable race for an undisputable victory. Too bad for Tilloca, forced to retire on lap 11 while strongly in 5th fighting with Bonetti, and for Juodvirsis, finished just off the podium.
KF Final
Boccolacci outsmarts Corberi
Final monopolized by the duel between Boccolacci and Corberi. After a difficult start of the weekend the number 1 of KF managed to impose his rhythm thanks to a set-up ideal to keep high performance in the last part of a very long 25-lap final. Boccolacci had only one spot where he could overtake the Italian Kosmic driver, at the chrono tower corner where the Energy driver did in fact manage to make up ground. Corberi closed the door time and again, but at the last lap Boccolacci chose the outside to get back at him in the following hairpin, the two made a slight contact and the French gained few meters, enough to close first at the chequered flag. After an exciting battle vith Pukema, Stupenkov completed the podium.