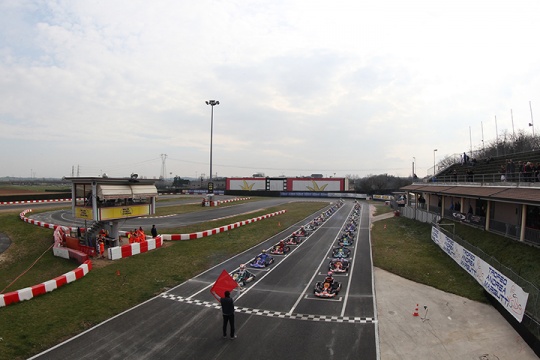 Press Release by: FM Press
The 28th Andrea Margutti, race organized by Parma Motorsport for next 25-26 March at the South Garda Karting track of Lonato, reached a remarkable figure of 223 entered drivers coming from 29 different countries. Several international stars at the start.
A total of 223 drivers entered the forthcoming 28th Andrea Margutti Trophy, race that will get underway at the South Garda Karting circuit of Lonato next 24-26 March 2017. The event organized by Parma Motorsport is part of the official CIK-FIA calendar.

Edition 2017 of the Andrea Margutti Trophy broke again the wall of 200 participations, as in the old days of the race named after the young talent Andrea Margutti, who passed away in 1989. A total of 223 drivers entered in fact the event that was first held in 1990 in Rome before moving to Parma.

The figures of the 28th edition of the Andrea Margutti Trophy  are very important and highlight the value given to this event by drivers, works and private teams. Entered drivers come from 29 different countries, which is another record compared to recent editions. Among the 223 racers, 93 are Italians and 130 come from abroad. Countries represented are Austria, Belgium, Brazil, Bulgaria, Canada, Czech Republic, Croatia, Denmark, Estonia, France, Germany, Great Britain, Ireland, Israel, Italy, Liechtenstein, Malaysia, Norway, Holland, Peru, Poland, Romania, Russia, Slovakia, Sweden, South Africa, Spain, Switzerland and Ukraine. Denmark is the most represented foreign country with 21 drivers, while the most numerous team is the Swedish Ward Racing that entered 23 drivers.

Several of the entered drivers already won the Andrea Margutti Trophy, like Giacomo Pollini who won it last year in KZ2 and Fabian Federer in 2012, while 2015 winner of the Trophy in 60 Mini Leonardo Marseglia will be present in OK-Junior. KF2 2012 winner Felice Tiene will compete in OK instead.

An eye will have to be kept on the comeback to the Margutti Trophy of the Dutch driver Henkie Waldschmidt. He won the Trophy in 100 ICA on CRG-Maxter back in 2004. Waldschmidt entered OK among the fields of CRG works team in this edition of the trophy. After karting he moved to motor racing competing in Formula Renault and Formula 3, becoming part of the Toyota Formula 1 programme from 2006 to 2008.

A lot of international karting champions entered the Andrea Margutti Trophy this year, as the young Callum Bradshaw of CRG, who will compete in OK after winning the CIK-FIA Academy last year, KF World Champion of 2013 Thomas Joyner will compete on Zanardi, and the International champion of the Gran Finals Rotax of 2015 Alex Irlando will also take part in the event.

The presence in X30 Senior for the new X30 Trophy is great and include several important names of the likes of Tino Donadei. The winner of the first round of the X30 Iame Challenge Italy Vittorio Russo will also be present, as several other protagonists of the season opener like Alessandro Salvarani, Andrea Bristot and Stefano Cavaciuti. Several foreign drivers decided to partake in the race to represent Spain, Liechtenstein, Germany, Sweden, France and Ireland.

Live TV, Live Timing and all results will be available at www.trofeomargutti.com and www.southgardakarting.it