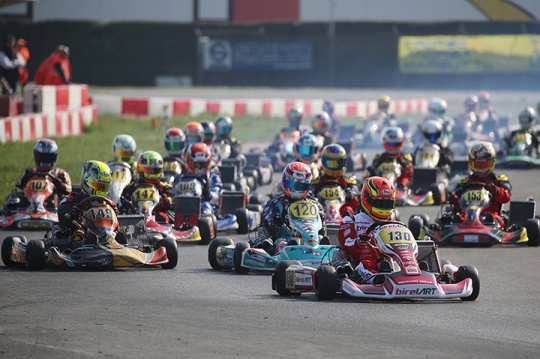 Author: Vroomkart International
The 28th edition of the trophy dedicate to Andrea Margutti provided emotion and displaied pure karting: the best way to honour his memory.
Written by Alessandro Roca.

Out of the 53 drivers in KZ2, Riccardo Longhi (BirelART-TM) confirms himself as the man to beat in the shifter class at South Garda Karting: after the win in the Trofeo delle Industrie the last October and the fourth place took at the Winter Cup he won also the 28th Trofeo Andrea Margutti: “We struggled more than we expected because we had to start on P16 in the prefinal, but I had a great set up and it gave me the possibility to recover from the back. When I was second I studied Federer and then I passed him and took home the win”. Fabian Federer (CRG-TM) had to settle for second after being on top since qualifying shadowed by Giacomo Pollini (Formula K-TM).

On Saturday everyone would have bet on Chiesa Corse’s drivers: pole position for Tom Joyner, followed by Lorenzo Travisanutto and Adam Eteki (Zanardi-Parilla). Unfortunately the white-blue squad lost Eteki in the first manche forcing him to the back, while Travisanutto got the pole position after manches ahead of his teammate Joyner and CRG’s duo Callum Bradshaw and Denis Hauger (CRG-Parilla), the latter author of a great comeback in the first manche. An extraordinary Bradshaw won prefinal and final leaving no chance to Lorenzo Taravisanutto, the only driver from Chiesa Corse remained on top, who settled for second. European OK Junior champion Finlay Kenneally (Tony Kart-Vortex) passed to Baby Race team from Energy Corse and immediately took home a third place ahead of his teammate Marzio Moretti and OK newcomer Alex Irlando (Sodi-TM).

Andrea Rosso (Tony Kart-Vortex) took home another important win in this first part of the season: second in qualifying behind Mattia Michelotto (Zanardi-Parilla) and only fourth after qualifying heats, the Baby Race driver found his way to the top in the final where he got the better of Chiesa Corse’s duo composed by Michelotto and Leonardo Marseglia. “It was a difficult race because I didn’t start very well, but I had such a great pace and I took home the win, even if my rivals were so fast that during last laps I was a little bit worried!” said the winner Andrea Rosso.

At the end, there were four drivers in only 0.161 seconds: Alfio Spina (CRG-TM) built his success session after session and in the final race he was able to win a photofinish race against Baby Race drivers Russian Nikita Bedrin and Alessandro Cenedese (Tony Kart-TM) and Gabriele Minì (Parolin-TM) thanks to a last lap overtake.

Vittorio Russo (Tony Kart-IAME) took home the win starting from P6 and beating Andrea Bistrot (Vemme-IAME) who was in first position since manches. Last step of the podium for Alessandro Brigatti (Tony Kart-IAME).