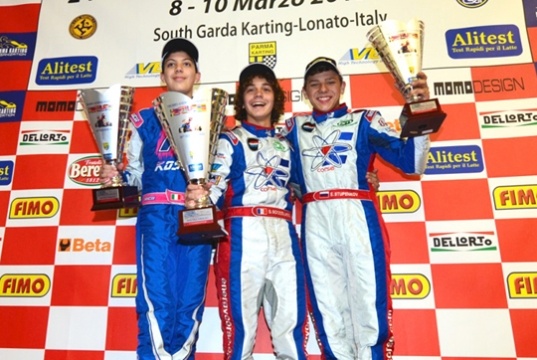 On Sunday, the sun shined bright on an electrifying event. Once again, the 24th Margutti Trophy held in Lonato proved to be the opportunity to shine and learn, highlighting the action of the protagonists on track.
The 24th edition of the Margutti Trophy will go down in history both for the adverse weather conditions, particularly on Friday, and for the nail-biting finals held on a sunny Sunday. As Margutti's legendary commentator Umberto Pellegrini used to say, the sun shines bright on the Margutti, and this time was no exception, making the crowd particularly cheerful after the relentless rainfalls that characterized the early part of the weekend.
Not only the sun was there to warm up the day, as the beautiful atmosphere peaked with the drivers presentation ceremony, and the touching speeches in Andrea's memory.
Following the exciting finals, the prize giving ceremony was also superb with the first 10 drivers classified of each category receiving prizes and accolades.

Thrilling finals
As for the track response, this edition of the Margutti saw some highly exciting races, despite the changing weather conditions which forced teams and drivers into a tour de force. All in all, those who performed well in Friday's free practice confirmed good performances all the way through both in wet and dry conditions, and the racing level of the spectacle met all expectations. And this speaks well of the skill level of teams and drivers, showing they can adapt to all track conditions.
For this reason, the 24th edition of the Margutti Trophy confirms the great value of this international event and the worth of those who manage to place their name in the Margutti's hall of fame.

This time, the spectacular finals saw four new drivers writing their name in the Margutti Trophy history book.
In 60 Mini, Domenico Cicognini (Kosmic) - winner of the Spring Trophy recently held in Lonato and current Mini Rok Italian champion - took advantage of the technical problems experienced by main title contender Eliseo Martinez (Hero) in the formation lap of the prefixal to grab the win. Despite Martinez problem, who managed to come back to 4th in the final, Cicognini proved very competitive already from qualifying and stepped on the top of the podium joined by Lorenzo Colombo (Top Kart) and Makar Mizevich (Tony Kart).


In KZ2, Kristijan Habulin is protagonist of a superb performance. The Croatian driver on Crg powered by Modena-Engines dominated the category from start to finish for the entire weekend.
Kristijan Habulin (KZ2 Winner)
“The entire weekend was truly fantastic. Everything was perfect, and the Modena Engines performance was outstanding. In the final I had a slight problem at the start, so I decided to run smooth without forcing the overtake. As soon as I took the lead back, I knew that I had to lap consistently without wearing the tyres too much. Nearing the end, with 5 laps to go I had enough to increase the pace, I lapped below the 42” and took a brilliant win. I’m over the moon!
After a season in Formula Renault, my comeback could not have been sweeter! In my karting career I’ve won several races, but this one at the Margutti is by far the most important. After 24 editions, the Margutti Trophy continues to be one of the most prestigious events of the international calendar, and I would love to race again next year to defend my title.”


In KF, the exciting duel between Dorian Boccolacci (Energy/Tm) and Luca Corberi (Kosmic/Vortex) saw the French driver having the better at the very last lap. We will definitely see more rounds of this fight to come in the next races of the 2013 season.
Dorian Boccolacci (KF Winner)
“What a race, and what a weekend! This Margutti Trophy started very well for me, with fastest lap in qualifying and victory in both my heats. Then the prefinal was a bit crazy, and in the final I had to give everything I had to beat Corberi. In fact he was faster in the slower section of the track and I had to make up all the time lost in the faster part where my engine was superior at higher rpm. He defended very well but ultimately I managed to take him at the last lap with few corners left.
I’m elated for the win, it’s my first major victory this season and I hope to continue this way. I would like to come back next year, the Margutti is special, the atmosphere is fantastic and the prize giving is truly awesome, with a chassis for the first classified and lots of prizes for the first 10 drivers.”


Also KFJ category ended up with a nail-biting overtake. Daniel Ticktum (FA/Vortex) was the protagonist of a fantastic comeback which saw the British driver moving past leader Gabriel Aubry (Birel/Tm) in the closing stages.
Daniel Ticktum (KFJ Winner)
"I cannot believe I won. The early part of the weekend was quite difficult, qualifying was not the best and the second heat was also somewhat troublesome. Nevertheless I managed to start the prefinal from row 4, I had a very good start and closed in 4th place. In the final I did my very best, in lap 2 I was already in 2nd place but it was difficult to stay with the leader. Thankfully he made a slight mistake with two laps to go and I got past him to grab the win, it was very tight but this is the Margutti!
This trophy gives you the opportunity to race against the best drivers in the world, it's a chance to work on your race craft in a highly competitive field, and I will definitely be back next year, hopefully in KF." 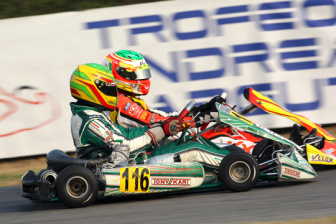