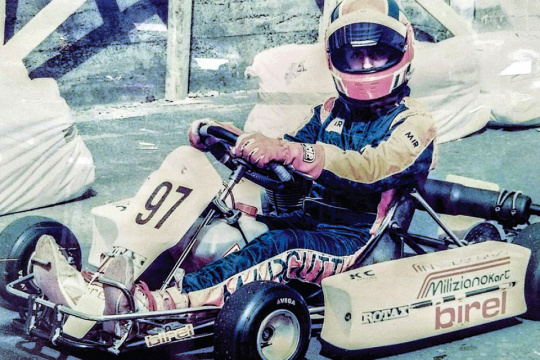 Author: Vroomkart International
From being a great season-starter classic, the Trophy in memory of Andrea Margutti has changed its skin over the years, also due to an increasingly packed race calendar. But it hasn't lost its charm: this year too, almost 300 participants. (F.M.)
It’s been years since it was held on the historical track of Parma (closed in 2008), but in today's complex and evolved karting scenario, the Margutti Trophy remains a certainty at the start of the season. In the early years of its history, let's not forget, it was a race that opened the official season and saw the top drivers of world karting line up at the start: if we look at the Trophy's roll of honor, we find several names that have made Formula 1 history, not only among Andrea's contemporaries (Trulli, Fisichella, and others, who were great friends of Andrea) but also in later periods. The editions held first at the 7 Laghi track (from 2009 to 2011) and then in Lonato allowed the race to maintain its character of a great classic in a calendar that due to the lengthening of the racing season (by now we’re racing 11 months and a half a year...) risked being swallowed up. If we think of the Champions' Cup of Jesolo or the Champions' Trophy of the Pista d’Oro, as examples, these are races that unfortunately have not resisted adverse factors such as an increasingly dense calendar or the closure of the facility as in the case of the Margutti - linked to the track of Parma.

Andrea Margutti, the memory of his mechanic Miliziano
These are events that change your life but which, apart from the pain of tragedy, the result of a fatality of a few seconds, leave an indelible memory in anyone who has had the opportunity to meet the protagonist. Today Andrea Margutti is best known for the famous trophy that proudly bears his name for the 33rd time this year and that has united generations of drivers, but until that terrible day in October 1989 he was a young driver, talented and fast as few others:
«Me, of 1989, I remember the World in Zaragoza, the one won by Jan Magnussen (Kevin's father, now Haas driver, ed.) - Miliziano remembers with emotion - Andrea had gone extremely fast right from practise. He was 21st out of 250 drivers, and – look - at that time Junior was a really Top category! He had run very well in the heats but then due to a problem with the reel he had lost positions for the final ... Then there was an accident at the start and the commissioners who did not allow him to start again. I think that without that terrible accident that took him away from us, he would have won something important very soon [after].» Historical Milanese tuner, Miliziano was Andrea's personal mechanic. He followed him like a son in races throughout Italy: «Andrea never complained. He adapted to the vehicle. He was extremely fast but also modest. I remember him as a very generous guy. Once he also made me angry: we were in Aci Sant’Antonio (photo archive Miliziano Kart), a city race that we did that month of August before going on vacation together. He forgot to tell me that he had run out of brakes and had to run the final practically without brakes, having told me we were ready to go while on the grid now!»

Miliziano keeps a clear memory of the tragic fatality that put a tragically early end to Andrea's life and career that day on the Parma track. «He had just finished doing a warm up and was in a hurry to start stepping on the gas. You know what kids are like. He wanted to take the slipstream of Malandrucco who was on the track with him among the numerous drivers of the national 100 who crowded the free session. I signalled to him to slow down and take another lap before starting to force, so we were calm. At that exact moment, Andrea moved inside the starting straight to make room for the fastest drivers to pass him, turning slightly [to look]. A little ahead of him, a driver with the kart struggling to start - it was probably flooded - and the mechanic occupied the track. It was a split second: the mechanic stepped aside and the kart in front of him was planted still. Andrea took the wheels of that vehicle and rolled over. An accident as many are seen but destiny was ruthless: with the impact (probably with the seat) the aorta vein broke, immediately causing serious internal bleeding. An ambulance arrived first and after a while the helicopter rescue, but there was nothing to be done: Andrea died shortly after.»

More than thirty years have passed since this tragedy and fortunately, something has changed in karting. An accident like Andrea's, one of the most dangerous ever with karts, that is the collision with a stationary vehicle, has a different context from that of 1989: now people wear rib protectors (which probably would have avoided those tragic consequences for Andrea), the marshals are always present since free practice and - above all - there is no racing, nor testing, in the absence of ambulances. There is still work to be done, as has been said many times, but a lot has been done and we cannot ignore it.

Racing in 2022
As for Sunday's race, the categories at the start on the Lonato circuit will be 5: Minikart, OKJ, KZ2, X30 Junior and X30 Senior with the record number of drivers registered, as usual in these years, in the Mini.