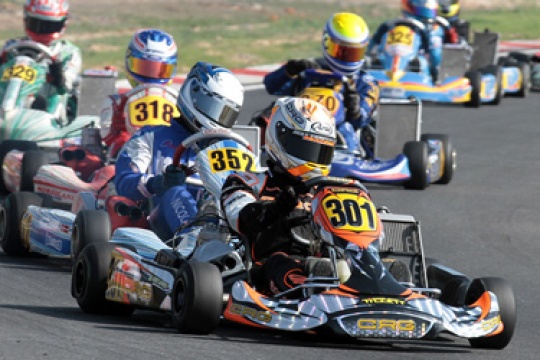 VERSTAPPEN CLOSE TO THE KF3 TITLE. THONON READY TO GET BACK IN THE GAME IN KZ1 AND TORSELLINI IN KZ2 AFTER THE THIRD PLACE IN THE CIK-FIA EUROPEAN CHAMPIONSHIP.
IN KF1, TIENE, LENNOX AND TILLET READY TO FIGHT TO BE AMONG THE TOP DRIVERS.

Lonato del Garda (Brescia - Italy). After a two months’ pause, the great international WSK karting comes back with the third event of the Euro Series from 23rd to 26th June. The venue of the last but one event is the International Circuit La Conca of Muro Leccese in Italy.
After the opening event of Sarno and the Portuguese race of Portimao on last 17th April, the third round of the season is going to be a crucial passage for the general rankings before the final event of Zuera, in Spain, due at the end of July.

CRG Official Team is in the running especially in three categories: KF3 with Max Verstappen, KZ1 with Jonathan Thonon and Mirko Torsellini in KZ2, where the development of the CRG chassis and of the Maxter engines – especially in the gearbox category – has shown an excellent competiveness.

In KF3 the Dutch Max Verstappen has got such a wide lead in the ranking that he could already grab the title in Muro Leccese. With his 74 points lead – with only 85 points up for grabs putting together the pre-final and the final - , the young and talented CRG driver could become WSK Euro 2011 Champion: Muro Leccese represents his first match point. Verstappen and CRG, in KF3, can also count on the quick and motivated Japanese driver Jina Jamakawa. 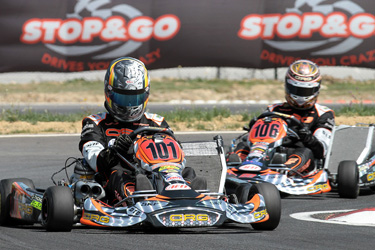 n the top category – KZ1 – the Belgian Jonathan Thonon with his CRG-Maxter is the centre of attention. Thonon is only nine points behind his fellow countryman Dreezen, but his main goal is to redeem himself after his last, unlucky performances, such as the recent European Championship of Wackersdorf, where he had to retire because of a puncture. Thonon can boast two wins on four races of the Euro WSK, but in Muro Leccese he can definitely become king of the category once more. Together with Thonon, also Arnaud Kozlinski and David Forè will be running in KZ1. The former is keeping on developing the Maxter engine – directly set up by the Italian parent company - with outstanding results and stepped on the podium in Portugal; the latter has been always with the top drivers of the category and placed fifth in the recent European Championship in Germany. Thonon and Forè, as usual, will be running with the Maxter engines set up by Tec-Sav.In KZ2 CRG is represented by the young driver Mirko Torsellini. He placed third in the European Championship of Wackersdrof and he currently occupies the second position of the WSK Euro Series ranking, 45 points behind the leader: those 45 points which he could have got in Portimao if he had not got involved in a crash with his teammate Pex. In Muro Leccese he needs to recover if he wants to run for the title in Spain. In KF1, for CRG, the event of Muro Leccese is an occasion to be seized to take some step forward in the development and in the competitiveness of the Maxter engines. In this category Felice Tiene together with the English drivers Jordon Lennox-Lamb and the quick Laura Tillett (see picture) are all motivated and aim to get a prestigious result.

The fourth and last event of the WSK Euro Series is due in Zuera (Spain) from 29th to 31st July.

All the results and the programme details on www.wskarting.com

CRG OFFICIAL TEAM DRIVERS AND RACE NUMBERS IN THE WSK EURO SERIES OF MURO L. (I)