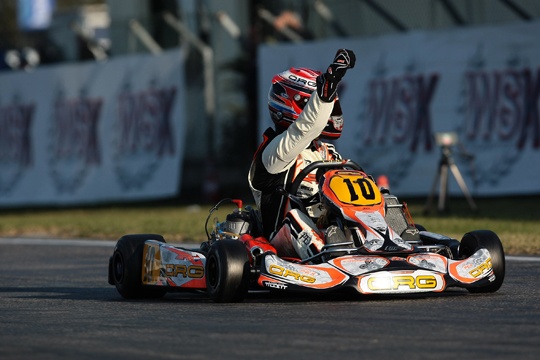 Press Release by: CRG
The stunning victory of Jorrit Pex on CRG-TM in the WSK Champions Cup round of La Conca (Ph. Cunaphoto.it).
Good victory in KZ2 for Jorrit Pex in the second round of the WSK Champions Cup. Positive finish for Dionisios in KF. An incident stopped Martinez in KF Junior. Victory and 60 Mini title to team Gamoto Racing and Muizzuddin.

A solid spectacle made of strength and competitiveness was offered by CRG and Jorrit Pex in the second round of the KZ2 WSK Champions Cup round of Muro Leccese (Lecce, Italy), that was the second and last act of the early season International series run in two rounds.

CRG AND PEX TRIUMPHANT IN KZ2
The young Dutch driver in force at CRG Holland conceded himself the luxury of beating fair and square the rivals on his CRG-TM. Once he got to the lead, at lap 7 out of 20, Jorrit run a race on his own league managing at best the CRG chassis and TM engine that supported him all the way to the triumphant crossing of the finish line.

Thanks to this victory and the unlucky ninth place of the previous round, Jorrit Pex secured the third position in the classification where he closed behind the winner Hanley and Camponeschi. This result gave CRG and Jorrit a good confidence boost for the continuation of the season.

Jorrit's younger brother, the 15 years old Stan Pex, was also among the protagonists of this second round of the Champions Cup as he put in a very good debut in KZ2 where he finished 13th absolute after securing the 9th place in the Prefinal.

Davide Forè, on CRG-TM run by team DTK, experienced a troubled weekend instead, as he was forced to the retirement in the Final after being excluded from the Prefinal when found underweight due to a water leak from the radiator. Despite of this inconvenience, Forè confirmed to be again among the strongest racers of KZ.

POSITIVE TREND FOR DIONISIOS IN KF
Solid performance for Dionisios Marcu, on CRG-TM, in KF after a difficult qualifying due to an unlucky tires choice in the changing weather conditions. He however managed to recoup in the heats where he ended 13th and then 11th in the Prefinal, despite an incident at the start. He finally ended his weekend with the 12th place of the Final.

INCIDENT FOR MARTINEZ IN KF JUNIOR
Both Eliseo Martinez Merono and Pietro Mazzola missed out on gaining access to the KF Junior Final mainly due to the incidents they were involved in during the Prefinal. In particular, Martinez has been hit from the back and sent out during the first lap of the Final. Martinez had previously managed to climb from the 29th to the 9th place in the heats and the young Spaniard was all set for a good final part of the weekend. The incident at the first lap of the Prefinal voided the good work done up to that point instead.

GAMOTO AND MUIZZUDDIN GET THE 60 MINI TITLE
CRG colors got on the podium also on 60 Mini thanks to team Gamoto and to its two jewels running on CRG-LKE: the Malaysian driver Muizzuddin Abdul Gafar, 12 years of age, winner of the Final and the Champions Cup title, and the Russian Bogdan Fetisov, who obtained a well deserved second step of the podium in La Conca.

NEXT ROUND
The International Circuit Napoli of Sarno will house the next round for CRG drivers on 23rd March. They will be competing in fact in the first of the three rounds of the WSK Super Master Series.

All results are available on  www.wsk.it