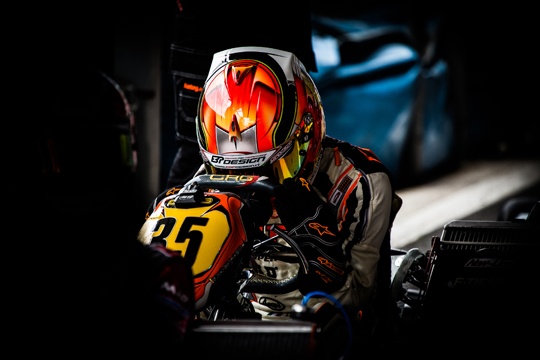 Press Release by: CRG
In the picture, Felice Tiene in KF (Ph Pastanella)
CRG works team will be on track on the weekend of April 27th with very good chances in KF and KF Junior, the two categories that next May 11th will open the International CIK-FIA races with the European Championship. KF Junior classification leader Mauricio Baiz to debut with CRG. Team Gamoto chasing the title in 60 Mini.

Muro Leccese will be housing the third round of WSK Super Master at the International Circuit La Conca. This is going to be the final act of the series that, together with the two rounds of the WSK Champions Cup, opened the first part of the international 2014 karting season.

This coming WSK weekend in Puglia will be a good chance to secure a strong result as well as an occasion to prepare ahead of the first round of the International CIK-FIA calendar, that will take place in La Conca next 11 May with the European KF and KF Junior championships.

VERY GOOD POTENTIAL IN KF
CRG will get to La Conca with a good potential in KF as Felice Tiene will be quite motivated to secure a solid result in KF after the good performance he put in at the last race in Castelletto (Pavia). Alongside Tiene,  CRG will also be represented by the Spaniard Pedro Hiltbrand, the Venezuelan driver Sidney Gomez and the Romanian Dionisios Marcu.

BAIZ TO THE DEBUT IN KF JUNIOR
A good novelty will characterize CRG's weekend in KF Junior as the young and very quick Venezuelan driver Mauricio Baiz will join forces with the team. He is fighting for the WSK Super Master title after the double victory in Castelletto's Prefinal and Final, results that launched him on top of the charts.  Baiz will debut with CRG works team and he will afterwards run the whole CIK-FIA international season wearing the Italian firm's colors. Together with Baiz, CRG will also field the Spaniard Eliseo Martinez and the Briton Archie Tillett.

FORE’ HUNTING FOR A COUNTER IN KZ2
CRG colors will be defended by Davide Forè in KZ2 at La Conca. The Italian will be racing with the Polish team DTK. After the first two unlucky rounds of Sarno and Castelletto,  Forè will try his best to make up for the lost ground and to solve those problems that affected him in this initial part of the season.

TEAM GAMOTO READY TO HIT THE BIG TARGET IN 60 MINI
The third round of WSK Super Master will award the 60 Mini title, series where team Gamoto has been displaying very good performances as usual. The team will in fact be in the title hunt with the Malaysian driver Muizzuddin Abdul Gafar on the always more and more competitive chassis  CRG/Hero. Muizzuddin comes from the nice victory in the race of Castelletto and gets to La Conca standing third in the classification with 80 points.

All results of WSK Super Master Series will be available through the website  www.wsk.it