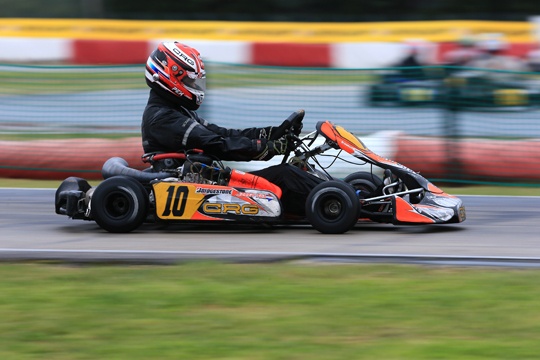 Press Release by: CRG
In the picture, Jorrit Pex
A contact involving Davide Forè and Jorrit Pex made them lose precious positions when the podium was at reach.  Dionisios did not make it to the start in KF Final due to a small technical problem. Eliseo Martinez to the fore in KF Junior.

The WSK Champions Cup has started at the Internazional Circuit La Conca, with the first of the two rounds held on 2nd March. This has been an ideal training ahead of the forthcoming season as well as an interesting race due to the stakes and the technical challenge involving more than 190 drivers.

In this occasion CRG fielded Dionisios Marcu in KF, Eliseo Martinez and Pietro Mazzola in KF Junior, while the Italian firm competed in KZ2 with Davide Forè in force at team DTK and Jorrit Pex at CRG Holland.

FORE’ AND PEX CLOSE TO THE PODIUM in KZ2
The two color bearers of CRG in KZ2 put in a streak of very good performances throughout the weekend, including in the Final where only an unlucky contact between the two stripped Forè and Pex from the chance of getting the podium they had in sight. That was a real pity as the two CRG drivers had been among the main protagonists of the category since qualifying, where they set the 4th and 5th time. Forè ended 7th in the Final and Pex 8th. The youngest son of the Dutch Pex family, the very young Stan Pex, made its debut in KZ2. He run an apprenticeship race with good lap times.

VERY GOOD DIONISIOS IN KF UNTIL THE FINAL
Dionisios Marcu had a good weekend in KF where he started from the 13th time in qualifying, gained P10 in the heats and ended 15th in Prefinal. A small technical problem to a spark plug in the formation lap unfortunately forced him to give up at the start of the Final.

GOOD GROWTH FOR MARTINEZ  IN KFJ
The Spaniard  Eliseo Martinez is gaining more and more experience and put in a solid performance in this second exit of the season, despite some difficulties he had to face at the beginning of the weekend. Martinez managed in fact to recover from the starting 44th place in qualifying to the 27th of the heats and then concluded his Prefinal in 11th, position that was confirmed in the Final.

Pietro Mazzola had some difficulties at the beginning of the KFJ weekend too but then gained the 17th place of his Prefinal. In the Final, he lost some ground in the final stages and crossed the line in 27th place.

GAMOTO ALWAYS IN 60 MINI'S FRONTLINE
Very good performance once again for the two drivers in force at Gamoto Racing in 60 Mini which highlighted once again the competitiveness of CRG/Hero's chassis. The Malaysian driver Muizzuddin Abdul Gafar ended with a very good fourth place after finishing the Prefinal in third. Good weekend also for Dennis Hauger, who was 11th in the Final after the 5th place in the Prefinal while Francesco Tripoli closed his effort in 15th place after setting the 5th time in qualifying.

NEXT ROUND
The next round of the season is going to take place again in La Conca on the weekend of the 9th of March with the second and final round of the WSK Champions Cup that will name the champions of this newly born series.

All results of the race are available at www.kartcrg.com.