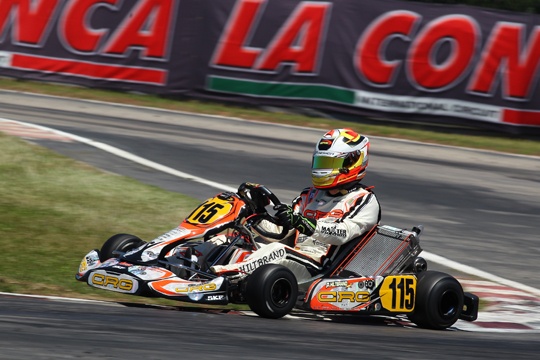 Press Release by: CRG
Pedro Hiltbrand, KF - Ph CRG Press
Pedro Hiltbrand and Felice Tiene earned a very good position for the final stages of the first round of the European CIK-FIA Championship in KF underway at La Conca. Both will have good chances to score a good result. Eliseo Martinez is the best in KF Junior.

Solid start for CRG in La Conca's first round of the European CIK-FIA KF and KF Junior Championship. Several good performances in a crescendo from practice to qualifying heats make CRG's works team --  reigning champion in KF following the 2013 title won by Max Verstappen --  quite positive for the remainder of the weekend.

CRG works team fielded 4 drivers in KF and 4 in KF Junior and turned out to be competitive and ready to slide in among the main interpreters of the European series, especially in KF where Felice Tiene and Pedro Hiltbrand already showed the pace necessary to fight for the victory, while Dionisios Marcu and Sidney Gomez have been a bit more unlucky so far.

Life is going to be a bit more complicated for the youngsters racing in KF Junior, as Eliseo Martinez, Mauricio Baiz, Konstantinos and Archie Tillett are committed to emerge in this quite lively category. The season debut has been positive in a weekend characterized so far by a crescendo of results and a constant improvement, despite a few incidents slowing down some of the team's works drivers.

HILTBRAND AND TIENE VERY QUICK IN KF
In KF the Spaniard Pedro Hiltbrand and Felice Tiene confirmed to be very quick and put in very fast lap times in qualifying and are respectively in third and sixth absolute place after the heats, which gives them quite good chances for the final stages to be held on Sunday. The Romanian driver Dionisios Marcu and the Venezuelan Sidney Gomez will have to run the repechage race instead, as the first experienced some technical inconveniences and the latter was involved in a racing incident in the heats.

MARTINEZ THE BEST IN KF JUNIOR
The Spaniard Eliseo Martinez has been the quickest of the CRG lot in KF Junior, as he currently stands fourth absolute at the end of the heats. He could have obtained an even better place if he were not involved in some contacts with rivals in his final heat. The Briton Archie Tillett also earned access to the final. The Venezuelan Mauricio Baiz and the Greek Konstantinos will have to run the repechage race instead.