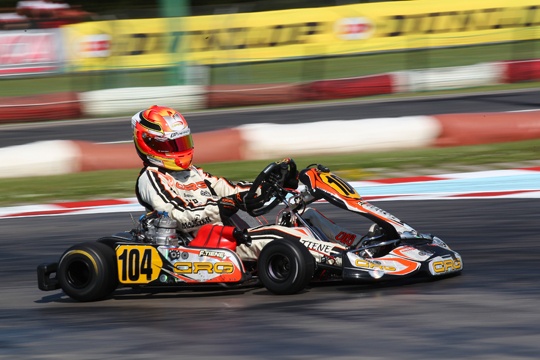 Press Release by: CRG
Felice Tiene, KF (Ph CRG Press)
Great race for Felice Tiene who recovered in KF Final from P25 to the fourth place. Very good race for Pedro Hiltbrand too, always among the best and eventually good fifth. Solid debut for Eliseo Martinez in KF Junior, despite being stopped by an incident.

La Conca (Lecce, Italy). Only the podium is missing to set in stone the very good result obtained by CRG in the first weekend of the European CIK-FIA KF & KF Junior Championship, held at the International Circuit La Conca of Muro Leccese. Felice Tiene and Pedro Hiltbrand secured important points for the classification and Eliseo Martinez turned out to be a protagonist in KF Junior.

The KF Final has been absolutely spectacular and it involved Felice Tiene and the Spaniard Pedro Hiltbrand, both putting in a stunning final stage on their CRG-TM. Hiltbrand has had a constant pace always being among the front runners, while Tiene had a weekend in crescendo completing a comeback final race from the 25th place of the grid up to the fourth place. This performance demonstration displayed by CRG envisages a good remainder of the season for the Italian team, that is the current reigning champion thanks to the title won last year by Max Verstappen.

The pace shown in La Conca's Final could have awarded Tiene with the podium (perhaps  even with the top step of the podium) if it were not for a violent bumping he has been involved in at the first corner of the Prefinal. The Italian driver rejoined as last and later on managed to recover up to the 25th place of the Prefinal, but then he put in a stunning comeback race in the Final. Very good race also for Hiltbrand, who has been quick since qualifying (best in his session) and heats (third), establishing himself among the front runners (he was third in the Prefinal) to end fifth later on in the Final, behind Tiene.

Bad luck hit Dionisios Marcu instead, who was forced to the retirement due to a technical problem during the first lap of the Final, after he won the repechage recovering up to the 19th place in the Prefinal.

Even tougher luck for Sidney Gomez, who has seen his weekend being compromised in qualifying due to the engine failure. He displayed all his quality in the repechage though, where he managed to secure the fifth place despite starting 17th on the grid! A 10 seconds penalty due to a problem at the start stripped him from the satisfaction of running the final stages.

The victory in the first round of the European KF Championship went to the Briton Callum Ilott (Zanardi-Parilla).

The young Eliseo Martinez Merono has been the most productive and quick driver in KF Junior, even if he would have deserved much more in his debut race of the European Championship. Unfortunately, he has been forced to the retirement at lap one of the Final when at the first hairpin he was involved in the heat of the start. That was a real shame as Martinez could have easily secured a good final result building on his sixth place of the Prefinal.

A brilliant Archie Tillett managed also to secure a place in the Final, ending his race in P21. Several problems affected the other two youngsters in force at CRG instead: the Venezuelan Mauricio Baiz and the Greek driver Konstantinos. Baiz missed out on the final by just a whisker as he ended seventh in the Repechage after recovering from the 19th place on the grid, while Konstantinos has been delayed by several contacts in the “hot” stages of the repechage race after running a good qualifying stage.

Euan Jeffery, CRG team manager: “We are happy on this European Championship opener. We showed good competitiveness both in KF and KF Junior. Felice Tiene run an extraordinary race in KF completing an incredible comeback. He has been perfect and very precise in all the overtaking moves. Pedro Hiltbrand completed a good race too, he has been excellent from lights to flag and made it into the top five. We made a good show of the quality of our material and of our drivers, therefore we can aim to good results in this season too. I am sorry for Dionisios Marcu as he had a problem at the first lap in the Final, and for Sidney Gomez who could not make it to the Final due to a penalty in the repechage. In KF Junior we had a good progression of results improving all our material. We still miss something and we are working to improve it, but I am quite positive for the future. All our drivers have been competitive. What a shame for Eliseo Martinez, he could not get what he deserved in the Final due to an incident right after the start.”

Felice Tiene: “What a shame for the contact I was involved in the Prefinal, but I am very satisfied on the fourth place obtained in the Final. My objective was to score some points in this race and I did exactly that. We still have a few things to sort out but, after qualifying, we constantly improved in the heats and I had very good material for the final stages, with a better performance of chassis and engine. This result gives me a lot of confidence for the remainder of the championship.”

Pedro Hiltbrand: “I am happy on my fifth place. I made a small mistake exiting from a fast corner at the last lap and Felice overtook me, but I still am OK with fifth. What is important is the good speed I had. The championship is long and I will counter-charge in the next round that is going to be my home race in Zuera (Spain).”

All the results of the European CIK-FIA KF & KF Junior Championships are available at  www.cikfia.com,  www.cikfiachampionship.com