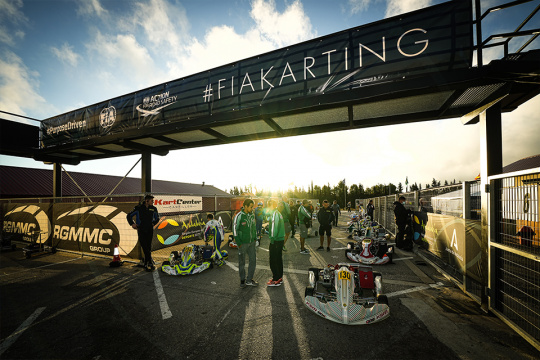 Author: Vroomkart International
FIA Secretary General Peter Bayer has set the scene for the 2022 FIA Karting season by officially opening the new course that aims for a more inclusive karting movement.
In the official note released by the FIA, Peter Bayer congratulated the karting world for completing the season in the best possible way, despite the fact that the presence of Covid inevitably complicated the situation more than expected. A fact that has not allowed the original project of the last two years to see the light, starting from a calendar that has been revised and modified several times with new satisfied and some unhappy.

On this subject, Bayer returned to talk about the Brazilian affair and the OK/OKJ World Championship that never took place.
«A disappointment of the 2021 season was the difficulty and impossibility of travelling to Brazil as planned for the World Championship» - explains Bayer. «I share the disappointment of Riccardo Gracia and the CBA whose passion, enthusiasm and persistent efforts were not rewarded. Health restrictions forced us to look for an alternative venue. The choice of Spain and the Campillos circuit for the OK and Junior World Championship was a very good decision for us. We were introduced to a very interesting venue which was supported by a dedicated organisational team and the Real Federacion Espanola de Automovilismo».

A still open wound that, at least for 2022, will see no possibility of compensation with the dates and tracks currently already confirmed and all European.

«The return to the high level of participants is a great reward for FIA Karting in a period that has not yet returned to normal. Launched five years ago, the OK and OK-Junior classes are now very popular and are to be applauded for their effectiveness in providing top-level international karting and for the important role they play in the transition to the early stages of motorsport. Looking ahead, we have come up with several initiatives that will be implemented progressively from next year. The FIA and the World Motor Sport Council are determined to support the new karting strategy. Allowing more drivers from all over the world to test themselves and eventually reach the top level is the main goal».

Probably in tandem with the missed Brazilian showcase, it is clear from the words of the FIA Secretary General how much the Federation itself has on its list of "good intentions" a more inclusive vision of the sport that can gradually bring karting everywhere, building on the Academy Trophy model for all the countries that still cannot be included in the karting tradition.

«Programmes to attract the general public to karting will be developed in several countries that do not yet have access to a karting culture or adequate infrastructure. The creation of FIA Karting Regional Cups will then facilitate access to competition in FIA Karting categories along the lines of the FIA Karting Academy Trophy, which has proved the relevance of its accessible single-make formula for over 10 years. In addition to the FIA, F1 is also committed to supporting a number of initiatives to develop kart racing through its global audience».

The path mapped out by the FIA therefore appears to be clear in its intention to expand a stage as global as the highest aspiration Formula 1.

The start is scheduled for the weekend of 7/10 April at Portimao with the first round of the FIA European Karting Championship (OK/OKJ).