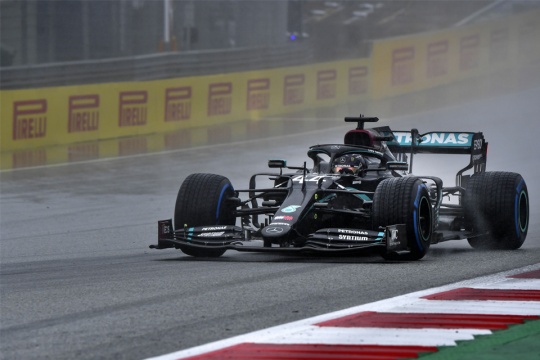 Author: Vroomkart International
Thus Lewis commented on his last pole position performance at the Styrian F1 GP, where he "tore" everyone in the wet
The qualifications of the Styrian GP, the second race of the 2020 Formula 1 World Championship, saw an outstanding performance by Lewis Hamilton who in the wet separated the others by more than 1 second, obtaining his 89th career pole position. A result which was followed by the race victory, but which was striking, above all, because it was obtained in such difficult conditions, with rain at times intense enough to have to postpone the start of the Austrian qualifying practice.

But what we are keen to highlight, as karters, is what Hamilton himself said after winning the said pole: «I'm very, very happy. It was a really tough day: the weather made everything complicated for everyone and I also got scared on the last lap, but it was really special and I love these days. After all, I remember when racing in a hundred times worse conditions in karts and in the minor formulas».

It is interesting how, at a time when it seems that everyone wants to pass F1 champions off as "soft" just because the race direction does not let the cars start with certain track conditions, Lewis makes it clear that he certainly did not hold back when the conditions were far worse. And how to reiterate that there are often greater difficulties in karting than in the top car category. We will talk more about it on Vroom International, but in the meantime we'd like to underscore what was said by the 6 times English world champion and ask you, our readers, too: what do you think about the difficulty of racing in the rain in a kart?