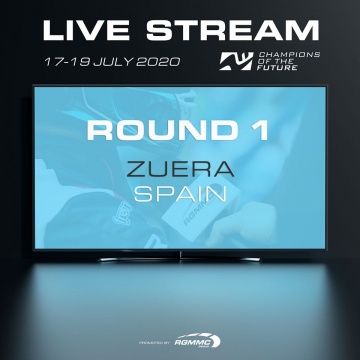 Author: Vroomkart International
The wait for the Champions Of The Future by RGMMC is over, the first verdicts for the competition staged in Zuera (LIVE TIMING ON OUR SITE).
The Spanish circuit will be the next venue for the start of the FIA ​​season, in this regard as already discussed in this interview (CLIK HERE) with James Geidel, the RGMMC has set up a competition in preparation for the European and World Championships. With a good number of participants despite the COVID-19 emergency which, in fact, did not allow everyone to reach the track, the first absolute qualifying is on stage today.

60 Mini - Matveev debut with pole
The cadet class is perhaps the one most influenced by the absences due to the pandemic but nevertheless, the show is always guaranteed. Dmitry Matveev (Energy) is the first poleman of the day with the best time in 1.09.471, second and third place for Kean Berta Nakamura (Team Driver) and Adam Hideg (KIDIX srl). The two Spaniards Costya (CRG) and Fluxa (KIDIX srl) close in the top five.
First heat awaited in the afternoon and live on our website.

OKJ - Stenshorne takes Rosberg to pole
After a good 2019, Martinius Stenshorne (Rosberg Racing) returned to the top floors of the standings with the pole position obtained for the OKJ platoon. The Direct Outlet class is obviously among the most numerous and the next protagonist of the European FIA brand opening. Behind 1.01.274 set by the Norwegian driver, Freddie Slater (RFM) follows with pole of group B, third comrade Coskun Irfan (RFM) at the top for group C. Two more group pole assigned with Brando Badoer (KR) and Ugo Ugochukwu (KR), respectively for groups D and E. Three heats scheduled in the next few hours, always live on our website.

OK - Valtanen launches the challenge
Given the recent performances, Juho Valtanen (Pantano) seems to want to launch the challenge to the competition obtaining a great absolute pole position. The Finn opens the Senior weekend, which is also expected at the FIA ​​debut with the best time almost under the minute in 1.00.066, and the Russian Nikita Bedrin (Ward Racing) follows and well at +0.046 from the top but still poleman of group B Party for Ward Racing with third place and group pole in the hands of Noah Degnbol, followed by third of the Ward Racing guys, Norton Andreasson. Last pole position for Lennox Racing driver Charles Leclerc, Oliver Gray with the fifth fastest time. Again there are three heats scheduled for the afternoon.

KZ2 - Ippolito satisfies CRG
The premier class also returns to Zuera and does so with a great Paolo Ippolito in pole position for the joy of CRG colors. A clear sign of recovery for the All Blacks with + 0.076sec advantage over Brad Benavides (CPB) in second place, third Daniel Vasile with the DR of Danilo Rossi. First heat waiting for the afternoon.

HERE THE PROGRAM OF THE WEEKEND