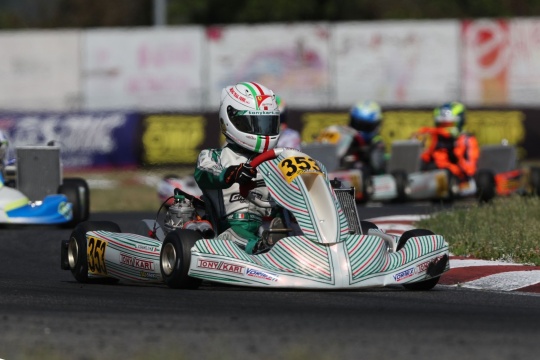 Press Release by: AG Media and Management
At the Circuito Internazionale Napoli, the first round of the European WSK Promotion series was staged, in which the drivers of the Gamoto Kart team expressed their good potential.
Luckless Frey, Blandino in a comeback

A weekend with a bitter ending for Enea Frey who, already from Friday's qualifying session, failed to impose his pace. Unfortunately, due to traffic on his flying lap, he finished in 18th group position. In the qualifying heats, the Swiss driver recovered very well, managing to get a good 14th starting position in pre-final A. Unfortunately, in the early stages of the latter he was involved in an accident, which forced him to retire.

Following a difficult start to the week, Cristian Blandino managed to enter the final, despite a muted qualification. The Italian driver performed well in the heats, and then repeated himself in the pre-final, thus obtaining the qualification. In the final, he fought hard, finishing in P30.

At his debut race in the OKJ category, Manuel Scognamiglio did not disappoint. The local driver from the Campania region, after a rather low-key qualifying session, climbed the ranks with fast laps in the qualifying heats, showing great feeling with the Sarno circuit. In the final, after a more conservative first phase, he climbed up to P14, just off the top 10.

Salvatore Gatto/Team Manager: "This weekend was very important for us as it was our debut in the OKJ category. The potential expressed by the drivers in both categories was good, which bodes well for the next races."

The next appointment of the Gamoto team will be the Trofeo d’Estate this weekend at South Garda Karting, with Enea Frey and Cristian Blandino.