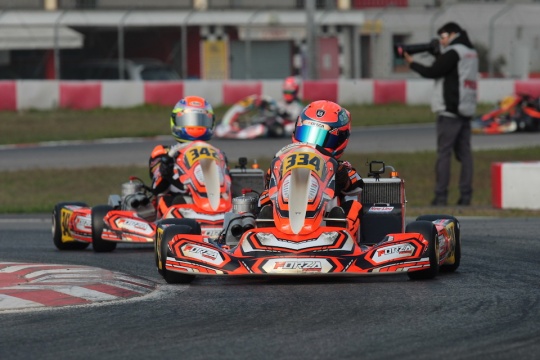 This is the team's third victory in three years, after having triumphed in both OK and OKJ in 2017.

Dilano van T’Hoff was the protagonist of a perfect weekend in which, after setting the fastest time in qualifying, he also maintained first place in the heats. On Sunday Dilano confirmed to be the best in the rain, too, winning both Pre-Final and Final with a considerable gap.

Gilles Stadsbader, on the other hand, after having neared the top5 in the Qualifying Practices, closing 6th, and having finished 5th in the heats, was forced to make a superhuman effort in the
Final after retiring in the Prefinal. Starting last, Stadsbader made a great comeback, from 16th to 8th position.

Alfie Rigby started the Lonato weekend on what was a definitely uphill climb. At his 2nd race for the team, the Briton qualified in P51. From that moment on, however, Rigby rolled up his sleeves, foot down, and recovered step by step all the way up to P10!

The adverse climatic conditions, on the other hand, did not help our Jonathan Weywadt, Maxwell Dodds and Maxime Furon Castelain, who'd set out to finish the weekend at the top, but were cut out by retirements in the Final.

Jamie Croxford, Team Principal: "It's always an emotion to win this race. It's the 3rd time in the last 3 editions, and it's also the first victory for Dilano in OK after a brilliant season. Also, his team showed great progress despite very difficult track conditions."

The next event is the 2nd and last act of the WSK Open Cup scheduled in Castelletto di Branduzzo.