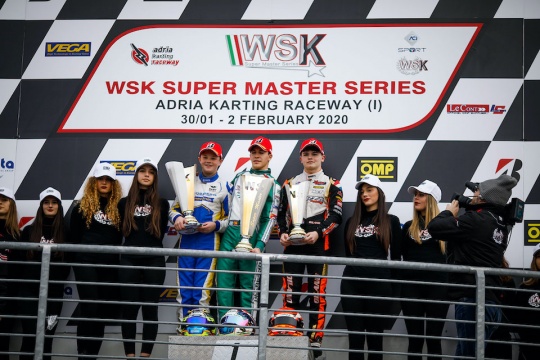 The British team confirms its good feeling with the Adria circuit in a weekend that, compared to last week's, spared drivers and mechanics from the rain.
OK - van T’Hoff on the podium, Camara on the comeback. Huang, unlucky
Dilano van T’Hoff, P3 - After being put out of contention in the recent WSK Champions Cup, the Dutch driver showed up at the track with one clear objective: to take back what was taken away from him last week; and so he did. After a weekend in crescendo, van T'Hoff crossed the finish line of a spectacular OK final in 3rd place.
Rafael Camara, P17 – Camara started the weekend with some difficulty, but the Brazilian, thanks to the determination that distinguishes him, climbed the ranks, heat after heat. Having started in P29, Camara flew past rivals to finish in P17, gaining 12 positions.
Xizheng Huang, X – Lady Luck turned her back on the Chinese driver; he did, however, prove to be fast and, above all, is definitely progressing.
OKJ – Ferreira zips ahead in the Final, Dodds and Weywadt forced to retire. Wiśniewski just misses the final
Matheus Ferreira, P13 - After a difficult start, the Brazilian driver showed his strength on Sunday. In the Final he finished in P13, having fought his way up the ranks with a recovery of as many as 15 positions, and a best lap very close to the frontrunners.
Maxwell Dodds, X - After the 9th fastest time, the Briton was plagued by bad luck, which struck him several times, preventing him from making the most of his high potential. In any case, Dodds showed an extremely positive attitude that will certainly help him throughout the season.
Jonathan Weywadt, X - The first round of the WSK Super Master Series was not the weekend Weywadt expected, as he was beset by trouble.

Gustaw Wiśniewski, X - In the second WSK race of his young career, the Pole just missed out on qualifying for Final A.

Jamie Croxford, Team Owner: «I'm very satisfied with this podium, but in general all the drivers did a good job. We leave Adria with an overall positive result, but above all with the awareness of having good potential. Now it's time to move to Lonato for the Winter Cup and then Round 2 of the WSK Super Master Series.»
© photo: M. Perrucca