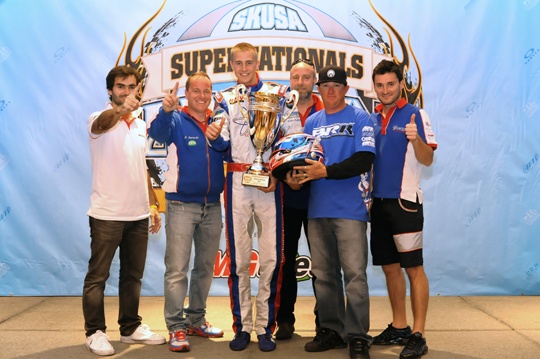 As it has done regularly for several years, Energy Corse has been again one of the most prolific teams in terms of results on the international scene. Equally competitive in KF and in KZ, the Italian team achieved a double success (European Championship-WSK Euro Series) in KZ2, while its other drivers also showed excellent performances. From the start of the 2013 season, Energy will be on the starting blocks aiming for new successes...
Photo KSP
Choosing Energy Corse means the 100% reliability of a perfectly structured, reputed, winning and experienced team, with a flawless organisation and unfailing competence. Competition and victory are in Michele Panigada's team DNA! At each race, the Italian team manager, his trusted technicians and his reference engine mechanics spare no efforts to prepare super competitive karts for the drivers who wear the colours of Energy. The team is also committed to creating solid relations with its drivers to better advise them and help them on their path to victory.

KZ2? A Specialty of Energy Corse
There are countless drivers who have achieved their goals with Energy over the last few years. Simas Juodvirsis has been an excellent example of that in 2012. The Lithuanian driver, who previously competed in Rotax DD2, triumphed at the European KZ2 Championship and offered Energy its fifth title in nine years in this category, where the number of drivers is always high. On the circuit of Wackersdorf, the German Michele Di Martino from Jedi Racing Kart team secured Energy a fantastic one-two, while Juodvirsis repeated his excellent performances by winning the four-round WSK Euro Series less than two months later! Energy concluded the season in beauty with Joel Johansson's second place in the WSK Final Cup and another success for Juodvirsis, this time in the prestigious Las Vegas Supernationals in the S1 category.

A Busy Season for Olsen in KF2
Just arrived from the KF3 category, the young Danish driver Dennis Olsen did not take long to move to the higher level. Thanks to the qualities of his chassis and the competence of the Energy team he took an impressive number of podiums in KF2... 3rd in the Winter Cup, 3rd at a European Championship round, 4th in the WSK Master Series with a podium and winner of the WSK Final Cup, he showed an excellent performance in Germany that enabled him to win the title with eight podiums, including six victories in 10 races! Sam Snell's progress was also one of the top moments of the season. Not only did the fast British driver took with Energy his first major international victory at a round of the European Championship at PFI (6th in the general standings), but he was also 7th in the World Cup.
Vasiliy Romanov (5th in the German KF2 Championship), Marco Zanchetta (4th in the WSK Master Series KZ2 and 6th in the Winter Cup in the middle of KZ1 drivers), Kenneth Ostvold (12th in the European KZ2 Championship), Danilo Albanese (3rd in the KF3 Winter Cup ), Santino Ferrucci (6th in the European KF3 Championship), and Connor Jupp (7th in the European KF3 Championship) are some of the drivers who contributed to Energy Corse's increasingly long list of achievements.

Congratulations to all the team members, engine mechanics, drivers and partners. All eyes are now turned to 2013…