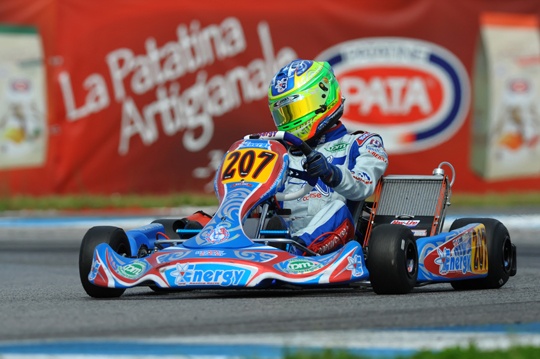 Press Release by: Energy Corse
Winning is the top goal for all the karting teams that compete on the international scene!
But for Energy Corse, this mission has very often been fulfilled. After an excellent beginning of the season, Energy has not rested on its laurels and has kept the momentum going at the WSK series and at the German Championship. In the German Championship, Dorian Boccolacci in KF and Parker Thompson in KF-Junior started at full speed and climbed onto the top step of the podium at Ampfing.

Germany: Energy Wins in KF and KF-Junior
The Energy brand has always been well-represented in the German Championship (DKM), with a strong involvement from its importer (Jedi Racing Team) and from the teams that have chosen Energy chassis. At the opening round at Ampfing, the official team moved there and came back with some brilliant results both in KF and KF-Junior. Dorian Boccolacci was unbeatable in KF. Pole position, heats, Race 1 and Race 2: the driver from Lotus F1 Junior Team programme won everything! Parker Thompson emerged too in KF-Junior: this young Canadian was 2nd at the end of the heats and concluded Race 1 with a third place, before brilliantly conquering a victory in Race 2. An excellent 5th place by the Danish driver Nicolai Kjergaard (TK Racing) is also worth mentioning.

WSK: Boccolacci Leads the Two Series
Chosen by the Lotus F1 Junior Team to support its driver Dorian Boccolacci in international competitions, the Energy Corse team is carrying forward one of the missions it has been pursuing for a number of years in karting: to discover and promote young drivers. Since the beginning of the season, this agreement has led to top level performances, which are still continuing. Boccolacci won the pre-final and was second in the final at the WSK Euro Series in Zuera. Two weeks later, at Sarno, during the WSK Master Series, he took a third and a second place. Now that the Championship is midway through in the two series, this young French driver leads the two classifications in KF!
Several Energy Corse drivers have achieved excellent results. Joel Johansson and Simas Juodvirsis were both back in the top 5 at Zuera in KZ2, as did Parker Thompson in KF-Junior at Sarno. The Canadian is currently very close to 4th place in the WSK Master Series. As for Sam Snell (who staged a superb fight back at Sarno), Vasily Romanov, and Egor Stupenkov, they have all taken advantage of the last few races to fine tune their preparation for the forthcoming European Championship.

Energy, Rotax Partner
Great news for Energy! The Italian brand has been chosen among chassis suppliers for next Rotax Grand Finals. It will be the top event of the end of the season, considering that it will be held for the first time in the US, and more precisely in New Orleans. This announcement is the logical consequence of all the efforts made by Energy on the American continent and on the Rotax market.