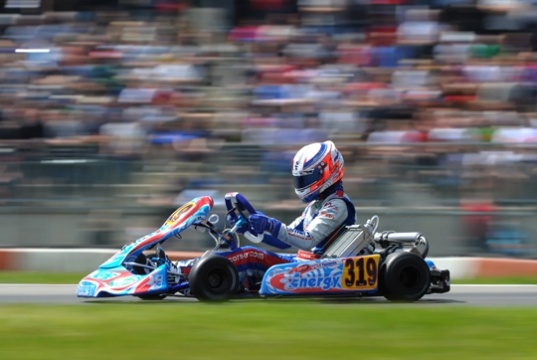 Press Release by: Energy Corse
In just one month, the Energy Corse team has added quite a few accomplishments to its list of achievements, in competitions considered the most difficult and the hardest fought on the international karting scene: European Championships and the WSK Euro Series.

Regardless of the nationality and experience of its drivers, Mick Panigada's team spares no efforts to support them to the top. Results were again positive for Energy-TM karts: KF title for Boccolacci in the WSK Euro Series, victory for Johansson at Genk in KZ2, podiums for Romanov in KF and for Thomson in KF-Junior!

Candidate to the European Title in KZ2

In Germany, the European KZ2 Championship started under the best auspices for Joel Johansson. The Swedish driver and his team adopted an excellent race strategy to win his pre-final. Johansson was third in the final and could not hide his satisfaction when he stepped down from the podium. "We remain in the race for the European title, which was our goal before Genk". Also worth mentioning is an encouraging 15th place for the Australian Christopher Hays, who unfortunately slipped down to 23rd due to a penalty.

At Wackersdorf, a pleasant surprise came from Michele Di Martino, who competed in KZ1 with the German team Jedi Racing Team. 15th in qualifying, he climbed up to 9th in the pre-final, and then was 7th in the final, where he faced the best drivers in the world!

Final Fireworks for Energy in WSK

Energy Corse was definitely the most noteworthy team in the WSK Euro Series final round held at Genk, in Belgium. The Italian brand, which has been a specialist in KZ2 for many years, triumphed with Johansson. In KF-Junior, Parker Thomson set the fastest time in timed qualifying. After a fourth place in the pre-final, the Energy Corse team fine-tuned the set-up for the Canadian driver, who climbed onto the third step of the podium. As for Bryan Elpitiya, the French driver managed perfectly his new kart, as witnessed by a 5th place in his pre-final.

But it was in KF that the "Energy Power" emerged in all its magnitude. Dorian Boccolacci, Vasiliy Romanov, Egor Stupenkov, and Sam Snell all entered the Super Pole, reserved to the 12 fastest drivers. The Energy armada confirmed its effectiveness throughout the weekend, so much so that there were four Energy-TM karts in the first eight positions of the final! Romanov conquered a 3rd place just ahead of Boccolacci, while Stupenkov climbed up from 12th to 5th and Snell concluded with an 8th place. And, icing on the cake, Boccolacci won the WSK Euro Series title, four weeks after the Lotus F1 Junior Team driver was crowned at the WSK Master Series. A great double success!

The Energy team repeated the satisfactory performances it had shown with cooler temperatures at season start in the heat of Alcaniz, where the opening round of the European KF et KF-Junior Championships was held. Among the youngest drivers, three drivers wearing the Energy colours ranked in the first 10 in the final: Thomson was 4th (3rd in his pre-final), Elpitiya was 6th (fastest lap in pre-final 2) and the Brazilian Giuliano Raucci (Gandolfi Ennio Racing team) was 10th. The Italian team was also very pleased to see its four KF drivers qualify for the final race: 18th place for Romanov, 16th for Stupenkov, with a special mention for Snell, who started from 27th and carved his way up to 11th, and another excellent performance for Boccolacci, who was 6th despite a collision that caused him to lose contact with the leaders at the beginning of the race.