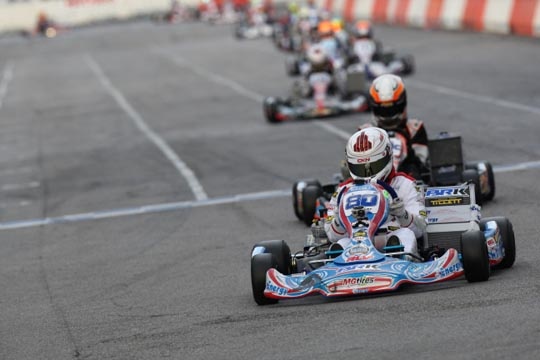 December 13, 2012 - Fresh off his dazzling podium result at the 2012 Rotax Max Challenge Grand Finals, Energy Corse driver Parker Thompson is making the move to Europe. Set to compete with the Energy Corse factory squad, the Canadian pilot will move across the pond in early January and compete on European soil. With plans in place to run in the KF3 division in the WSK Masters Series, WSK Euro Series, CIK/FIA World and European Championships, WSK Final Cup, Winter Cup, Bridgestone Cup, SKUSA SuperNationals as well as the German DKM program, Thompson will also see multiple weekends of testing and fill in races to complete a busy 2013 calendar.

"I am very excited to have the program in place," expressed Thompson in a recent phone interview from his home in Canada. "The entire program came together very quickly and this was truly an opportunity that I could not pass up. My family has been very supportive in this decision and I can't begin to thank them enough. We will get through the holidays and then I will begin my 2013 quest as I move to Italy in early January. It will be a busy season with 20 races already confirmed and multiple weekends of testing."


The multi-time karting champion will hope to continue his North American winning ways in Europe. A two-time Team Canada member at the Rotax Grand Finals, Thompson reached the podium in the 2012 edition of the event only a few short weeks ago. Never one to back down from a challenge, Thompson is a multi-time race winner and champion throughout Canada and the United States. Utilizing TM Engines and a factory prepared Energy chassis; Thompson has already begun track and facility research to ensure he is prepared to hit the track with knowledge gained while at home in Canada.

Forgoing the 2013 Florida Winter Tour and Gatorz Challenge of Americas, two programs that he was heavily involved in during the 2012 season, Thompson's season will start over the January 31 to February 3 weekend with the opening round of the WSK Masters Series at the International Circuit La Conca in Muro Leccese, Italy. Traveling throughout Europe and living near the factory in Desenzano del Garda, Italy, Thompson will also see action at major karting facilities in Spain and Belgium.


Thompson continued, "I'm ecstatic to be driving with such a professional and well-constructed team as Energy Corse. I know Energy Factory has what it takes to be KF3 World Champion, I will have to learn quick and adapt to the situations I am thrown in throughout the year if I want to come out on top with the world's best drivers. If I do so I think it will be a very successful year for Energy Corse in the KF3 division."

For more information on Parker Thompson including partnership opportunities, please visit him online at www.ParkerThompsonRacing.com or on Facebook at Parker Thompson Racing.