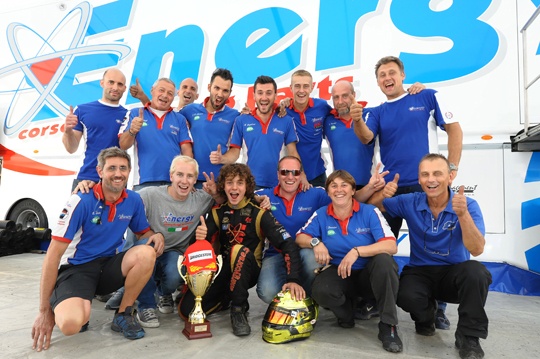 Press Release by: Energy Corse
Once again, the Energy Corse Team proved to be one of the great names in this class. Its drivers excelled during the whole weekend, especially Dorian Boccolacci. The Lotus F1 Junior Team driver won five qualifying heats and his pre-final and finally triumphed in the final race behind the wheel of his top-performing Energy-TM.
Held in France on the spectacular circuit of Varennes sur Allier on 20, 21, and 22 September, the CIK-FIA KZ2 International Super Cup is considered a real World Cup, with the presence of all the best KZ2 drivers and a high number of entrants (as many as 86)!
The 2013 KZ2 International Super Cup provided the Energy Corse team yet another opportunity to offer the many drivers who belong to its structure the best possible conditions to aim for good results. Team manager Mick Panigada and Energy highly competent support team provided useful advice to improve drivers' performances and refine kart preparation. Energy was also one of the best represented brands in KZ2.
At Varennes, Energy was joined by young Dorian Boccolacci, who competes in KF.

"When he was still a Junior in 2012, Dorian had a great first season in KF and this first international event has been a real-life test behind the wheel of a 125cc gearbox kart", Mick Panigada commented. After his first experience in this class the previous week in the Italian Championship, Boccolacci showed his fast adaptation skills. He set a promising 7th time in timed qualifying, preceding his team mate Simas Juodvirsis, European Champion in 2012. The two Energy drivers replicated these excellent performances by taking turns in the first place during the qualifying heats, while Joel Johansson showed some remarkable recoveries in the pack.

The pre-finals confirmed the competitiveness of Energy-TM karts, with a special mention for Boccolacci who secured a first-line position in the final race. But the French driver did not intend to stop there. Though the race was tough, he controlled his final brilliantly, made some fantastic passes and crossed the finish line as the winner. This was an extraordinary feat for Dorian as well as for the team supporting the Lotus F1 Junior Team driver. Due to a bit of pushing and shoving in the chasing pack, Juodvirsis and Johansson could not do better than 9th and 11th. Once again, Energy can be very satisfied with the results achieved in this international race.
Dominik Schmidt, François Santoni, Yan Pesce, and Adam Maatougui showed some interesting performances in the qualifying heats, with a special mention for Maatougui, who had the satisfaction to enter the final race, where he achieved his best result at international level.

The KF World Championship made its debut in England, on the PF International circuit of Brandon. Egor Stupenkov produced a great performance there. Concluding the final race with a 4th place despite a 43rd time in timed qualifying is definitely an impressive result! Always in the fastest group, the young Russian drove his kart in an exciting chase race. His efforts as well as those of the Energy Corse Team were rewarded by a 6th place in his pre-final and a return to 4th place in the final, not far from the podium. The competitiveness of Energy-TM karts was confirmed by Dorian Boccolacci's 9th place despite a difficult start and by Vasiliy Romanov's 14th position. Sam Snell drove flawlessly in the heats and in the pre-final, but unfortunately was forced to withdraw in the final race.