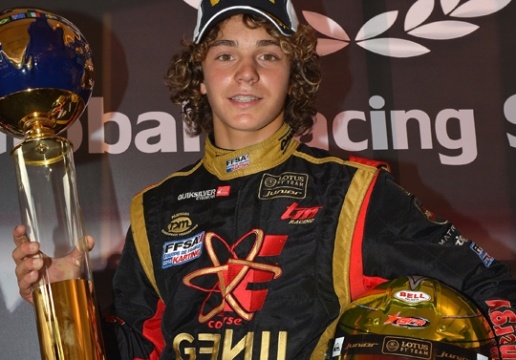 Press Release by: Energy Corse
Week after week, race by race, the Energy Corse team has continued its tireless quest for victory.

The last few weeks have been very fruitful in terms of success, with the title of Vice European KZ2 Champion conquered by Joel Johansson and a new triumph for Dorian Boccolacci in WSK. In 2013, the Energy Corse driver has won not only the Euro Series, but also the Master Series!

The most titled team in KZ2 of the last ten years in CIK official competitions, Energy Corse has come very close to winning another European Champion title in this class where its karts have always shown great performances! Joel Johansson did not beat Antonsen by just one point. Joel climbed onto the podium at Wackersdorf in May and at Genk in June, and also won his two pre-finals. Unfortunately this year, no points were awarded for the pre-finals and Johansson suffered the consequences of this rule. But again, Energy had a very positive return on its European campaign.

Boccolacci: King of the WSK in KF

He took seven top-10s in eight races, including two victories, three super poles and a lead of almost 100 points in KF final classification! Figures speak for themselves for Dorian Boccolacci in the WSK Master Series. At Castelletto di Branduzzo, in July, the French driver from the Energy Corse team secured his title already in the pre-final, which he won brilliantly. Dorian was forced to retire during the final race, but the Russian Vasily Romanov made himself noticed by moving up from 6th to 5th place. Sixth in the overall standings in KF-Junior, Parker Thomspon ran out of luck just when he was aiming for a podium finish in the Championship.

Energy Corse Distinguishes Itself at Ortona

For his first year in KF, Dorian Boccolacci played an active role in the European Championship, where Energy chassis proved again their great effectiveness as well as the success of Energy's partnership with TM and its engine mechanics. Constantly at the front at Alcaniz in Spain as well as at Ortona in Italy, Dorian was involved in a bit of pushing and shoving at the start and could not keep the pace of the leaders. Fourth in the final and 6th in the overall Championship, he will certainly be one of the protagonists of the 2013 World Championship.

Very close in terms of performances, Egor Stupenkov and Vasily Romanov completed an excellent Pre-final 2 (4th and 5th), and were respectively 8th and 11th in the final race. Sam Snell made a good start, but was forced to retire at the beginning of the race. There also was some disappointment for Parker Thompson in KF-Junior. He had come to compete for the title, was third after the qualifying phase but a collision in the pre-final destroyed all his chances. His team mate Bryan Epitiya was also very well placed (6th in the pre-final), but was hampered by too much pushing and shoving during the Italian weekend.