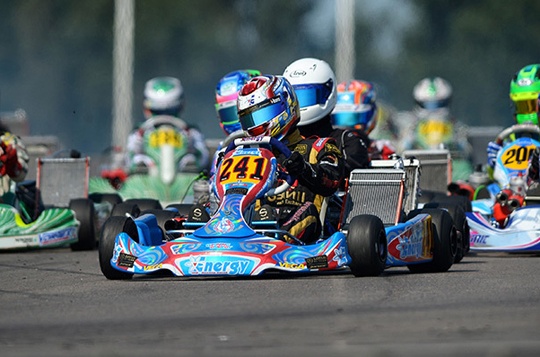 Press Release by: Energy Corse
The colours of the Energy Corse team and the Italian brand shined at the front of the European KF-Junior and KZ2 Championship event held in late July at Kristianstad in Sweden.
The American Juan Correa dominated the event in KF-Junior up to the finals. And in KZ2, after his victory in Germany, Simas Juodvirsis's fingertips touched the European Champion's crown, until an unfortunate racing incident. However, he saved a convincing podium in the final classification.
An Italian team well known in Scandinavia, Energy Corse has frequently hosted drivers from this corner of Europe in its awning. They were therefore keen to show good performances at the meeting in Sweden. On the very difficult Kristianstad track, the technical team formed by team manager Mick Panigada negotiated the meeting perfectly, showcasing the drivers with highly competitive equipment.
"The work done during free practice paid off. Our chassis proved very effective in KZ2 as well as KF-Junior and we can congratulate ourselves on the choice of engine. We are ready to fight for victory in the last part of the 2014 season, including the upcoming World Championships," rejoiced Energy Corse.
KZ2: Juodvirsis on the European podium
Despite the large number of entries in this category, the Energy Corse team managed to qualify all of the drivers for the finals: Simas Juodvirsis, Ricardo Romkema, Danny Bleek and Dominik Schmidt. An excellent 3rd after the heats, Juodvirsis found himself the leader of the provisional Championship before the decider. "The prefinal was hotly contested," said Simas. "I was able to run in second position for a while, before dropping to 5th place. But I was still in the best position to get the title." Very optimistic in view of his performance, the Energy Corse driver suddenly lost all chance after a racing incident. "Two years after my first European KZ2 Championship with Energy, I would have liked to repeat it, but finishing 3rd overall is still a good result at this level."
KF-Junior: Correa deserved better
After Dorian Boccolacci, who had a glorious season in 2013, the Lotus F1 Junior Team continues to trust the Energy Corse team, who is currently running Juan Correa. As he was able to do several times in 2014, the young American has impressed observers in Sweden driving his Energy-TM. His early meeting was dazzling: pole position and wins in all of his five heats, four times with the fastest lap ... Amazing domination!
Unfortunately, racing incidents hurt many drivers in the final phase. "Some drivers were very hot and too excited," lamented Juan. "It began in prefinal 1, where I could do no better than fifth despite a new fastest lap. And in the final, while I was recovered in the top three after only six laps, an incident caused me to lose twenty places. It was too bad, because my kart was fabulous and victory was within my reach."
Also at Energy, there was further progression for the Lithuanian Rokas Baciuška and the Estonian Juri Vips, as well as in 8th the Danish Julius Lassen (TK Racing).