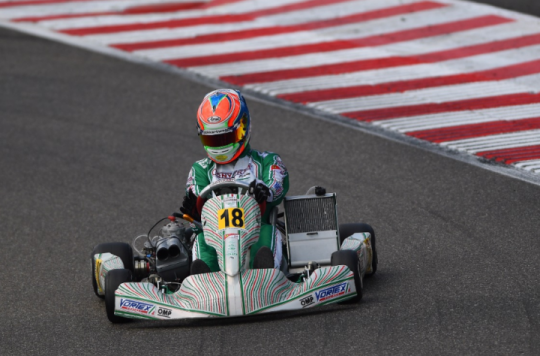 Here the shifter class (KZ) will host the third round out of four, while the single-gear categories, OK and OKJ, will run the second round out of the five scheduled.

In OK class, we are at the top positions with Clément Novalak and David Vidales, second and third respectively, after the podium they both won in the opening race, held on the International Naples Circuit (Italy). There are still three races to the end, so anything can still change, as well as a recovery of our drivers Pedro Hiltbrand and Gianluca Petecof, unlucky protagonists in the opening round.

In the cadet class, OKJ, Viktor Gustafsson is just back from excellent performances which led him to a successful continental debut and to winning precious points in the standings.

In KZ it will be our promising Luca Corberi defending our colors. On the Iberian track, unfortunately, Marco Ardigò will be absent, stopped by the accident that has already prevented our driver from showing off his potential and that of technical material during the first two championship rounds.

As always, the event coverage will be guaranteed by live timing and the direct streaming available on the official www.cikfia.tv and www.cikfiachampionship.com websites.

On our social pages, we will give news and pins on each stage of the event, which will start on Thursday 8th and will end on Sunday, June 11th.