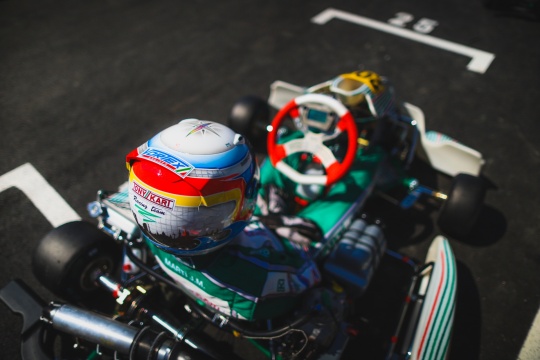 Press Release by: Tony Kart Racing Team
At the South Garda Karting, the Tony Kart Racing Team is lining up many newcomers to face the last races of the year in view of 2020.
With the first round of the WSK Open Cup, scheduled this weekend at the South Garda Karting in Lonato, Italy, the Tony Kart Racing Team is ready to face the last 2019 international appointments. Despite the season is coming to an end, we are looking forward to living intense races, especially regarding a series of new names making their debut with our colours and starting to work with us also in view of the next year.

The category with the highest number of newcomers is the OK, where we will have the pleasure of lining-up the 2018 and 2019 category World Champion Lorenzo Travisanutto and the 2016 World Champion Pedro Hiltbrand who, with the OTK material, already experienced important stages in his growth as driver.
Josep Maria Martì will also be able to benefit from the advices of the two world champions, ready to make his debut in the category of the most expert drivers after the third place gained at the World Championship and a high level season in OKJ.
Finally, Joseph Turney will have to put newcomers at their ease and will have to prove the excellent performance level achieved with the last few races.
In the OKJ category, the new entries are Harley Keeble, winner of the 2019 British Kart Championship in the IAME Cadet class, and Aiden Neate, also coming from the IAME Cadet category of the British Kart Championship.

Our Nikita Bedrin, proving to be one of the fastest Tony Kart drivers this year, will be the point of reference for all OKJ drivers.
As always in the WSK races, we will line up a large group of drivers also in 60 Mini: at the wheel of the Tony Kart Mini Rookie-EV, Jules Caranta, Jimmy Helias and Andreas Cardenas are ready to make real the excellent deal of progress shown during the year and close the 2019 in style.

In Lonato, the ranks of the Tony Kart Racing Team will further widen with the entry of Filippo Parmeggiani into the WSK circus, and with the return of the American James Egozi, eager to express himself on the high levels he was used to after a long stop due to injury.
In the end, in KZ2, Alessio Piccini will represent Tony Kart on a track where, also on the occasion of the recent International Super Cup, he proved to have the right stuff to stay in the first positions.

To be updated on the first round of the WSK Open Cup you only have to follow the live-timing available for all the race sessions on the official website www.wsk.it dedicated to the event. Sunday 27th October, instead, the appointment is at 11:00, local time, with the live-streaming of prefinals and finals.