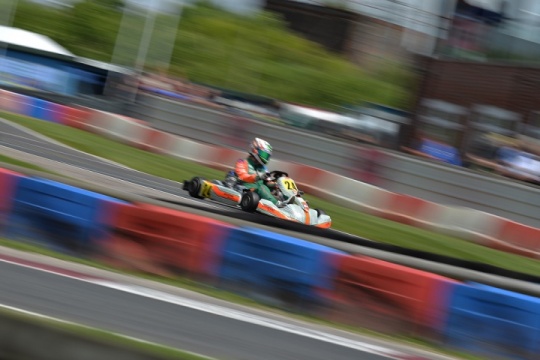 Press Release by: Super One Series
The Tuto Super One Series completed its fifth event at the Dorset circuit of Clay Pigeon, featuring the first two rounds of the British Championships for the international classes OK and OK-Junior. Honda Cadet and the two TKM classes had their third rounds with entries large enough for Repechages in two of the three classes.
Clay Pigeon was the first of three events in the MSA British Championships for OK and OK-Junior and was run as two separate rounds on Saturday and Sunday with Qualifying and two Finals on each day. Both classes were very close but while Harry Thompson edged it in the Junior class, there was no dominant force in the Seniors, with four different winners.

Billy Monger was presented with the money raised at the Rowrah Super One round - £3000 from collections and £1000 each from Super One and Cumbria Kart Racing Club.

The weather was dry but cloudy for most of the weekend, with a few disruptive showers.

Ivan Lomliev opened the scoring in Honda Cadet with pole in Timed Qualifying by 0.05s from Championship leader Archie Brown, but he dropped down the order after a DNF in his first heat while Brown and Joshua McLean shared the heat wins.

McLean started on pole for the first Final but he lost out at the start, so Brown went on to win ahead of Oliver Greenall despite a challenge from Ellingham.

Brown led Final 2 all the way with Greenall on his bumper and Sonny Smith eventually taking 3rd within the leading pack, which also included Theo Micouris and Aston Millar.

Brown has now extended his Championship lead to 58 points ahead of McLean going into the next round at Larkhall in Scotland on 13th August.

Harry Thompson took pole ahead of local driver Oakley Pryer, and Thompson went on to win Final 1 0.66s ahead of Alex Eades and Guy Cunnington with Pryer 4th. Cunnington was 2nd to Thompson for most of the race, then Eades overtook three laps from the end.

The weather put an end to Final 2 with a red flag just after half distance with Morgan Porter winning ahead of Luca Griggs and Tommy Foster, after Thompson had retired out of 2nd the lap before.

Thompson qualified on pole again on Sunday ahead of Alex Eades and Morgan Porter, then Thompson took a lights-to-flag win in Final 1 from Eades who was locked in battle with Porter, which allowed Jamie Day to catch up and take 3rd.

Final 2 was another dominant race for Thompson with Eades and Day fighting for 2nd, before a coming together between the two caused a red flag shortly before the race was due to end.

Thompson is leading in the points 15 ahead of Eades with the next rounds at Shenington in Oxfordshire on 26th and 27th August.

Joe Turney took pole for Saturday’s Round 1 in an incredibly tight session where the top seven were all within the same tenth. He was followed by Jamie Flynn and William Pettitt.

In Final 1 Roy Johnson came from the back to the front to win by half a second ahead of Gus Lawrence after Turney had led most of the race. Roman Haskett was another one to come through the field in Final 2, passing Johnson on lap 19 and followed through by Flynn who had been DQed in the first race. Oliver Clarke overtook Johnson on the last lap to complete the podium.

Turney took pole again on Sunday in a session which was again incredibly close. Mark Kimber and Bobby Game were next, within 0.04s.

Final 1 saw Turney passed by Lawrence after nine laps before he was in turn overcome by Kimber in the closing stages. In Final 2, Clarke and Johnson stormed through the field with newer tyres after retiring early in Final 1. Turney took the lead from Kimber early on which he held for half the race until Clarke took control and went on to win, three laps later followed by Johnson.

With four different winners over the two rounds, the British Championship is wide open but as the most consistent Turney is the Championship leader by three points from Kimber, with Lawrence six points behind that. The next rounds are at Shenington on 26th and 27th August.

In TKM Extreme Qualifying the top five lapped within a tenth, headed by Kristian Brierley from Adam Sparrow and Simon Vercoe, with the heat wins going to Lewis Wadley, Sparrow and Vercoe, with Vercoe taking pole for Final 1.

Final 1 was wet and cut short by a red flag while Vercoe was in the lead, following challenges from Stephen Letts and Peter Newman.

In better weather, Final 2 saw close battles with Vercoe, Newman and Lee Whittingham fighting over the lead before Letts swooped in to take control near the end, winning with Whittingham 2nd and Bradley White, another member of the lead pack, 3rd.

In the Championship, Letts is leading by 27 points from Vercoe with Taylor a further 54 points behind that. The TKMs will have their next round at Fulbeck in Lincolnshire on 25th June.

In the rainy Final 1 Pulling lost the lead on the first lap to Ross Deal and ended up 5th, while James Pashley came through to take the lead at half distance, ahead of Theo Hesketh who made up 15 places.

In Final 2 in better weather Pulling worked her way through to hit the front at half distance to win ahead of Pashley and the other race leader Kurt Roberts, after Hesketh was dropped down from 3rd with a bumper penalty.

Pulling is still the leader of the Championship with Pashley now four points ahead of Deal in 2nd and 3rd, heading into the next round at Fulbeck on 25th June.