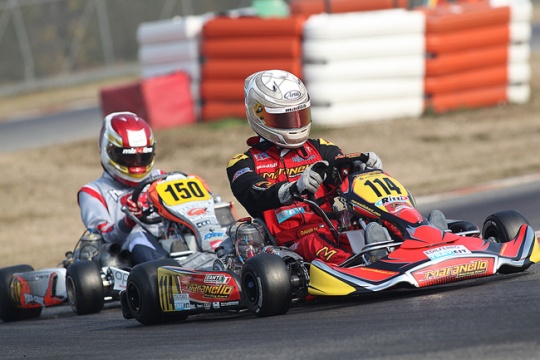 Press Release by: Parma Karting ASD
The event that reached its 26th edition will take place this coming weekend of 27-29 March in Lonato with drivers coming from 25 countries and 4 continents to remember Andrea Margutti.
The Andrea Margutti Trophy organized by Parma Karting is scheduled for this coming weekend (27 – 29 March) at South Garda Karting of Lonato. The race will enjoy a top class participation. Entry lists are defined as 163 drivers from 25 countries and 4 continents will make it to the track. This international event that is part of the CIK-FIA calendar continues therefore in the best possible way its tradition in edition number 26 keeping the memory alive of the young karting promise Andrea Margutti who passed away early on 14 October 1989.

The most numerous team will be Ward Racing, that will line up 12 drivers. Ward Racing entered in the 2015 edition of the Andrea Margutti Trophy one of the most interesting youngsters of international karting: the Russian Alexander Vartanyan on Tony Kart-Vortex, who won the 2013 Trofeo delle Industrie in KF3 and came second at the KF Junior Margutti Trophy last year.

Among the 26 drivers of KF there are a lot of strong contenders to the victory, such as 2013 world champion Tom Joyner, on Zanardi-Tm run by Strakka Bhaitech.

A total of 52 drivers will compete in KZ2 instead, category where Maranello Kart will line up its full team led by Massimo Dante, who recently dominated the Spring Trophy on the very same track of Lonato. The great entry list will be completed by drivers of the likes of Lorenzo Lapina of Italcorse-Modena, Sauro Cesetti of Jesolo-Tm and Loris Spinelli of Pcr-Tm. Among the favourites to the victory, the five times world champion Davide Forè, who displayed a great shape in this season so far, has been entered in the Margutti Trophy by Renda Motorsport on CRG-Tm.

KF Junior will be quite crowded as usual with 46 drivers ready to get on track, among which several protagonists of international karting like the American Logan Sargeant of team Ricky Flynn, who fought for the win in WSK Super Master in Castelletto last Sunday, eventually scoring a podium. The very quick Spanish girl  Marta Garcia will also take part in the race on FA-Tm.

The smallest category, 60 Mini, will have 38 drivers on track. A lot of the absolute protagonists of the category will be on track, such as Italian 2014 champion Giuseppe Fusco, who moved this year to Baby Race, while Marzio Moretti, who got on the podium last week in Castelletto, will wear Lario Motorsport's colors. Leonardo Marseglia of team Gamoto will be among the drivers aiming  for the victory, as Mattia Michelotto of Giugliano Kart, and a lot more.

The two days of Thursday 26 March and Friday 27 March will be devoted to free practice. On Saturday 28 March, qualifying practice will start at 10.00 (local time) and heats at 13.20. Second chance races for KFJ, 60 Mini and KZ2 will take place on Sunday 29 March at 10.30 and will be followed by Prefinals and Finals. Finalists presentation will take place at 12.30 and prize ceremonies at 17.30.