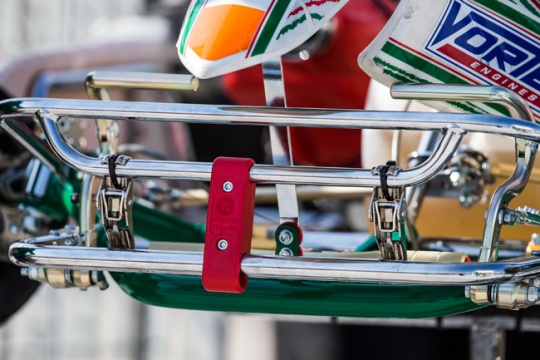 Author: Vroomkart International
In its latest communication, the CIK has announced to have found a solution to the drooping front fairings ending up underneath the kart. The new solution will be introduced to all international karting events at the beginning of May 2015.
In the official communication, Kay Oberheide, CIK Executive Secretary, went trough a Q&A trying to address all issues related to the question of the drooping front fairings, without sharing any technical detail on the new mounting system that has been found.
Here's the communication in full.


Why has the CIK-FIA decided to suspend, with immediate effect, the use of new front fairing mounting kit?
The only reason is because if the front fairing drops down onto the lower bar, it could, under certain circumstances, pass underneath the kart. This could only happen if the front of the kart is lifted upwards by around 15 cm, which is possible if a driver leaves the track and the kart crosses the verge or if the driver is moving along off the track on a surface that is not flat, for example on grass.
Why has the CIK implemented this system given that it seems that it is not technically advanced?
During several tests carried out by the CIK and even during the two events of the 2014 CIK-FIA Karting Academy Trophy (a total of 12 races) in which this system was used, the front fairing never passed underneath the kart after having dropped onto the lower bar. We should, however, reproach ourselves for not having tested this system away from the usual track, on uneven ground such as grass.
Has the new front fairing mount been abandoned permanently?
No, as we already mentioned on 17 March, we have suspended the use of this kit for an indefinite period.
How is the CIK-FIA working to find a solution?
Before suspending the use of new front fairing mounting kit, we had already conducted two days of testing aimed at finding a solution without having to change any homologated parts. We found some solutions. However, we had to take everything into account and ultimately, all these possible solutions were liable to have had an impact on other issues. Consequently, we had no choice other than to stop using the current fixation system.Having said this, yesterday we conducted a successful track test in which we found a solution that eliminated the possibility of the front fairing passing underneath the kart if it is no longer in the correct position. Now our partner, KG Karting will modify the mould of the ‘front fairing mounting kit’ and I am confident that we will be able to implement this system for all international karting events at the beginning of May 2015.
Is the CIK still convinced of the effectiveness of this system to fight against anti-sporting behaviour?
Yes. We have received some genuinely positive feedback from several team managers and drivers. In particular, after the first international event last weekend in Castelletto (ITA) in which this system was no longer used.
All of them explained that the races in which the system was used were particularly notable for fair sportsmanship. Therefore, we remain convinced that it was the correct decision to implement such a system.