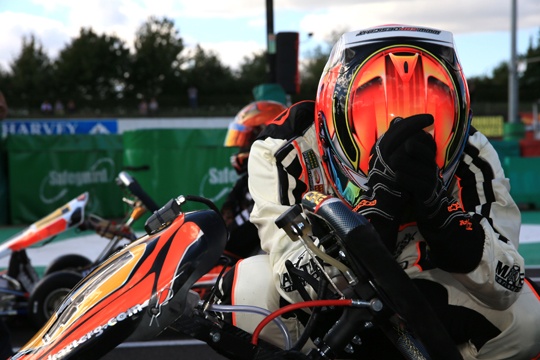 CRG is ready for the challenge of the two pivotal moment that are worth a whole season with its best drivers. The main objective remains to confirm the top class competitiveness of the Italian chassis and to improve even further the heavy prize list of the team, that is one of the most prestigious in the world karting history.

The first appointment is set for 18 – 21 September in France, at the International Circuit of Aunay Le Bois in Essay. The track located west of Paris and north of Le Mans will be the battle field of KF & KF Junior drivers. An unforeseeable role in the French campaign will be played by weather that is announced to be variable. The outcome will be even more unpredictable, should it rain.

CRG works team will take Felice Tiene, Pedro Hiltbrand, Dionisios Marcu and Sidney Gomez on track in KF at Essay. All four drivers will have the latest updates of the CRG chassis at their disposal, as well as KVS engine assistance.

Felice Tiene will certainly be quite motivated and pushed by the desire of turning his season around, as he has been a bit unlucky so far, tough still showing an high level of competitiveness. The Italian driver secured the KF2 World Cup in 2012 and the Asian-Pacific Championship in 2009. This year, Tiene has been eighth in the KF European Championship, as he had to give up due to an incident in the last two rounds of Genk and Brandon. Tiene is a specialist of KZ and came third in the European KZ2 Championship last year, while this year he has been on the second step of the podium of Kristianstad (Sweden), where he has been entitled to race thanks to a Wild Card. Tiene ended tenth in WSK Super Master thanks to a second place in the third and final race of La Conca.

The Spaniard Pedro Hiltbrand, this year seventh in the European KF Championship, is all set to run a good race, as he was close to get the podium in the most recent race of Brandon. Similarly, the Romanian driver Dionisios Marcu and the Venezuelan Sidney Gomez are certainly capable of getting good results.

CRG flags will be waved high by two young Brits in KF Junior: Alex Quinn and Archie Tillett will in fact get on track on CRG-Tm with engines by Gianfranco Galiffa. Alex Quinn is at his second experience after the debut at the European Championship held in Brandon, while Archie Tillett is competing in his second season and has already come to the fore, showing good progress so far.

Live streaming and all results will be available at www.cikfia.com and www.cikfiachampionship.com