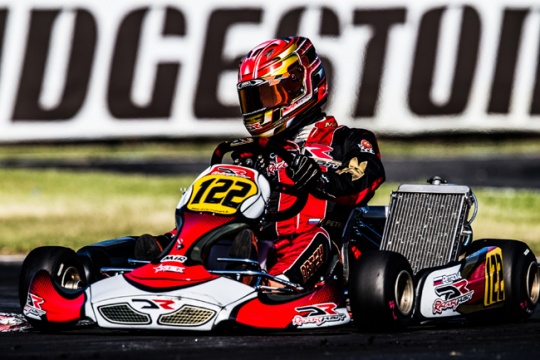 Press Release by: DR Racing Kart
DR Racing, the team of 5-time World Champion Danilo Rossi, was protagonist of the World KFJ Championship held in Muro Leccese on September 27 with Russian driver Artem Petrov, 6th at the chequered flag.
The fast Russian, after an intense fight for 4th in the final confirms his skill and the competitiveness of the DR chassis powered by Tm, the first chassis after five Otk at the chequered flag.
After stopping the 20th fastest time in qualifying, the Russian recovered well in the heats, taking 4th in the first with the fastest lap of the race, coupling this result with 5th and 6th in the following. Had it not been for an incident at the start of the second, he would have started the prefinal from the top rows of the grid. Instead, row 5 start and all to race for in a comeback mode.
Petrov is superb after a cautious start and by lap 4 he’s already in the top-5 fighting hard with the leading group. Two laps later the DR driver is 4th, hassling 3rd placed driver Drugovich for the remaining part of the race. In the end he would settle for 4th, with a positive 4 row start for the final.
Lapping consistently in the 46"3 like the fastest drivers in the race, Petrov soon comes back leapfrogging through the field after losing few positions at the start. By lap 6 the Russian is in 7th place 1”5 off the 3-kart train fighting for 4th. In a matter of two laps the gap is cut down to a mere 2 tenths, and Petrov is protagonist of a nail-biting fight that would continue until the end of the 21-lap final, providing the crowds and live streaming spectators with a confrontation of the ages. Attacks and counterattacks at each and every corner that reward the DR driver with a positive 6th place, with a slight regret for a potentially better result considering his pace matching that of the podium winners.

Positive performance also by the other Russian Nikita Aleksandrov (15th) who manages to lap in the 46”3 in the final after showing great speed in the heats (2nd, 7th and 8th his best results) and in prefinal where he fought for the top-5. Also Lithuanian Justas Jonusis (26th) confirms the competitiveness of the material making it to the final 34 out of the almost 100 entries. Italy’s Filippo Lazzaroni and Spain’s Martin Herencia completed the DR line up in La Conca showing good potential in the most competitive race of the season.