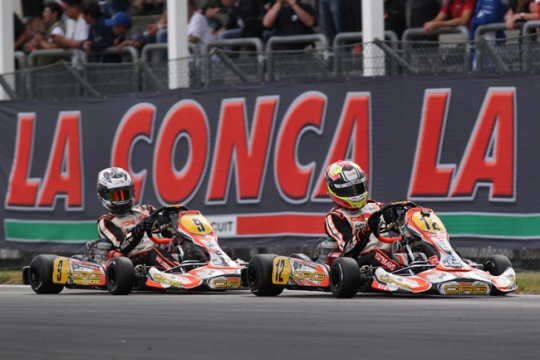 CRG works team has been among the most competitive teams also in this occasion, as its drivers have been protagonists of the event until the final stages, where only a series of unlucky episodes prevented the Italian squad to get another prestigious result.

HILTBRAND AND TIENE CONFIRMED TO BE AMONG THE QUICKEST IN KF
Only the lunge in the final went missing in La Conca, as especially Pedro Hiltbrand had to settle for the seventh place in the Final after always being very quick, starting from the third time posted in his qualifying session and a series of good results in the heats. Felice Tiene has also always been among the quickest, but then had to give up in the Prefinal due to an unlucky puncture to the rear left tyre. Started from the back of the grid, the Italian managed to complete a comeback race in the Final, but could not go beyond the 16th place.
The British driver Archie Tillett obtained a honourable 18th place, defending his position in a very tight final, while things went all wrong for Davide Forè, who had to leave the competition early for manually putting his nose cone back in place after a contact in one heat held on Sunday morning. This naiveness was paid by the four times World Champion with the exclusion.
The Japanese Tougo Suganami, who has experience in Asian Championships and the British Harry Webb, who had a lot of success in Rotax competitions, have also competed in KF wearing CRG colors, but despite being very competitive in several circumstances, they could not qualify for the Final stages due to some incidents they have been involved in.
The Dutch Martijn Van Leeuwen of team CRG Keijzer Racing has put in several good performances and ended the KF Final in eighth place, after being a great fourth after the heats.

VERY GOOD EXPERIENCE IN KF JUNIOR FOR QUINN AND MUIZZUDDIN
In KF Junior, the young British driver Alex Quinn continued his positive momentum being once again very competitive, as did the Malaysian Bin Abdul Jafar Muizzuddin assisted by Gamoto Racing. The two CRG drivers managed to get access to the final stages after shining in several occasions during the weekend, but despite getting through their Prefinal, they have been involved in two incidents in the Final: Quinn early on, while Muizzuddin towards the end.
The young Dutch driver Max Tubben of CRG Holland could take part in the Prefinal, but he did not manage to concretize his qualification to the Final.

CRG WINNING THE CIK-FIA MOST PRESTIGIOUS TROPHY
This event archived the International CIK-FIA 2015 season, which marked the final good bye to the categories KF and KF Junior that after nine years will be replaced next year by the new OK and OK Junior.
CRG's CIK-FIA season has been again a positive one, thanks to a series of high level performances in the European KZ and KF Championships and to the victory of the most prestigious trophy: the KZ World Championship secured at the end of an unforgettable final held in Le Mans last 13 September by Jorrit Pex and the second place of Paolo De Conto.