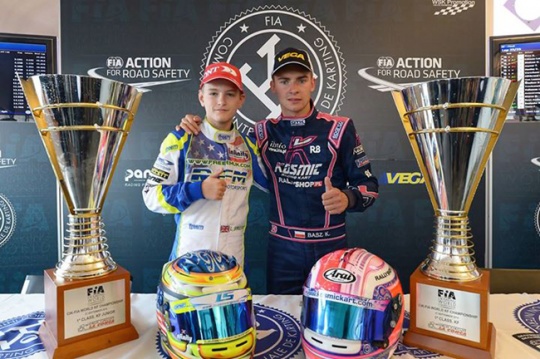 Press Release by: FIA Karting
It was not a big surprise to see Karol Basz and Logan Sargeant on the top step of the CIK-FIA World KF and KF-Junior Championship podiums at La Conca.

Both Drivers were unquestionably the strongest in the last World Competition open to KF engines. However, the sporting confrontation was particularly intense during the three days of racing on the beautiful Italian track.

The weekend was finally spared the rain. Very well maintained, La Conca is a track that is perfectly adapted to global competition, seven years after the last World Championship held in southern Italy. Many media personnel and spectators brought the lustre required for such an event, taking place in a passionate atmosphere. True to the discipline that is fundamental to motorsport, the 1991 World Formula K Champion Jarno Trulli came back to award the victors their trophies and was highly acclaimed on the podium.

In sporting terms, 163 Drivers participated in the Competition, representing 35 nations and 5 continents, a slightly higher entry than the previous edition. Now well accepted, the regulations regarding the front fairings helped to calm the enthusiasm of the Juniors in the first Qualifying Heats, through the application of numerous 10 second penalties. In addition to the technical layout of the La Conca track, the high grip proved to be very selective, in terms of driving as well as fitness.

It is interesting to note that the two Champions crowned at La Conca have followed a similar path: slightly ahead during Qualifying Practice, they both took the lead during the Qualifying Heats before winning successively the Prefinal and Final. A great success for chassis from the OTK factory and for Vortex engines.

Finally! This is the first word that comes to mind after the victory for Basz driving a Kosmic. A very experienced Driver in KF, the Pole Karol Basz (Kosmic Kart-Vortex-Vega) had never previously been recognized for his full strength, apart from winning the CIK-FIA International Super Cup in KF at Sarno 2013. Too often suffering setbacks on the road to victory, Basz remained cautious until the last laps of the Final: "Though I was more than three seconds ahead of my opponents, I was far from celebrating in advance," he confided. "I even adjusted by carburettor more than necessary so as not to risk a mechanical problem when I was finally going to reach the goal!" But this time fate did not intervene and he was able to experience the joy of winning the 2015 CIK-FIA World KF Championship. Racing his fisrt season with the Kosmic Racing Department managed by Olivier Maréchal, it was also the Italian brand's first global success

The contenders however were not lacking, starting with Nicklas Nielsen (Tony Kart-Vortex-Vega), the lead Driver of the Tony Kart factory team. Leader of Qualifying Practice, the Dane proved very fast in the Qualifying Heats, but could not make the difference during the finals, his set-up appearing to be less effective. It must be said that a formidable trio of British Drivers upped the pace in the meantime. The most surprising of these was undoubtedly Jordon Lennox-Lamb (BirelART-Parilla-Vega), only ninth at the end of the Qualifying Heats, who came back to 2nd place in the Final, while Nielsen finished 3rd. Tom Joyner (Zanardi-TM Racing-Vega) and Ben Hanley (Croc Promotions-TM Racing-Vega), respectively 4th and 5th, were very involved in the fight in the leading group. Ranked 6th, the Dutchman Richard Verschoor (Exprit-Vortex-Vega) was the first representative of the younger generation.

Logan Sargeant, a World Champion made in the USA

It is a long time since a US Driver has shone in a World Karting Championship. None in fact since 1978 and the victory of Lake Speed at Le Mans. The title of CIK-FIA World KF-Junior Champion won this weekend by Sargeant is a warning from across the Atlantic. The member of the team which had already won in 2014, Ricky Flynn Motorsport, Logan Sargeant (FA Kart-Vortex-LeCont) did not leave any hope for his opponents. Leader of the Qualifying Heats, he won both Prefinal 1 and the Final, always well detached ahead of his rivals in the battle to be runner-up. The most threatening was first his Venezuelan teammate Sebastian Fernandez Wahbeh (FA Kart-Vortex-LeCont), the winner of Prefinal 2. The presence of the Brazilians Felipe Drugovich (Kosmic-Vortex-LeCont) and Caio Collet (Kosmic-Vortex-LeCont ) and that of the Argentine Emiliano Giorgio Carrara (Luxor-LKE-LeCont) in the top 10 of the Qualifying Heats also showed the resurgence of South America at the highest level of Karting Competition. The French Driver Clement Novalak (Tony Kart / Vortex) fought for the 2nd place finish with the young and promising Collet. The Spaniard Sami Worship (FA Kart-Vortex-LeCont), another young talent, hoisted himself from 11th to 4th place. Unlike last year, the top three in the Championship, Sargeant, Novalak and Collet confirmed their intention to continue their career in karting next season. A wise choice!