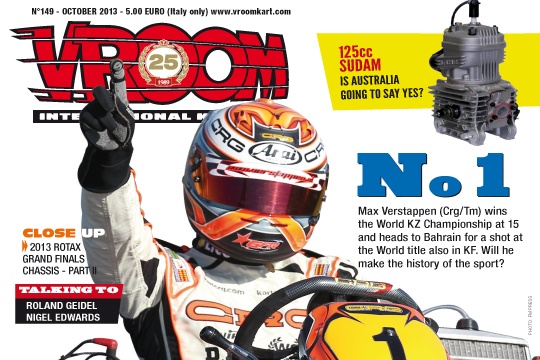 Author: Vroomkart International
Max Verstappen has monopolized the 2013 season karting season. With his brilliant win at PF International for the World KF Championship opener, and more recently in Varennes where he grabbed the World KZ title, the 15-year old Dutch is set to break all records. Besides the international stage, Australia made the headlines with the possible introduction of 125cc Sudam engines... the debate is on!

RACE REPORT – CIK-FIA World KZ Championship & International KZ2 Super Cup
It’s chiseled into the stone! Max Verstappen, 15-year old driver from Holland, son of former
F1 driver Jos, has made the history of the sport by clinching the World KZ Championship - the most coveted title Karting has to offer for which the best line-up of drivers battled in Varennes – as well as 2 European titles (one in KF and one in KZ) all in the same season...

GALLERY - World KZ Championship @ Varennes
Our photographic gallery from the French circuit where the most important title of the season has been awarded.

KARTING SEEN FROM F1 – The relevance of Karting in modern day motorsport
At the F1 Italian Grand Prix in Monza we intercepted some of the protagonists and snitched a few comments on the importance of Karting as a breeding ground. The result can only make us proud.

CLOSE UP – Australia about to adopt 125cc Sudam?
This article does not intend to disrupt any process or talks within the AKA about the future of Australian karting. On the contrary. But as it turned out, what started out as general interest story published on Vroom website about the possible growth of an already existing category, rapidly accelerated. It quickly became the topic of conversation from Melbourne to Malaysia, Hong Kong to London, Montreal to Paris and everywhere in between.

ONE ON ONE – Roland Geidel
2013 marked the 10th anniversary of the Rotax Max Euro Challenge, currently one of the must-race series in the Rotax international calendar, conceived and organized by RGMMC supremo Roland Geidel, who tells us the secrets behind the on-going success of his creature.

TALKING TO – Nigel Edwards
Contagiously enthusiastic, forward thinking, enthused by typically British frankness, dynamic as a teenager, instinctively professional, naturally a gentleman. We are talking about Nigel Edwards, Trent Valley Kart Club Chairman and Clerk of the course, the man responsible for re-launching Paul Fletcher’s PF International and restoring the prestige of British kart circuits on the international stage. Genuinely passionate about karting, Nigel assesses with us the success – and the shortcomings – of the first CIK World Championship in the UK after nearly 50 years.

RACE REPORT – CIK-FIA World KF Championship Rnd.1 & International KFJ Super Cup
The first round of the KF World Championship goes to Max Verstappen (Crg/Tm), a very fast driver, son of another professional. Not only does he win the final and puts a big bet on the title, he dominates every session, from qualifiers to heats and also prefinal and final race.

RACE REPORT – Rotax Euro Challenge Rnd.4
After a week of sunshine, conditions changed with showers on Friday and Saturday, only for the sun to pop out again just in time for Sunday’s finals.  About 140 drivers from all around the world took on the grids in Salbris, the 1,500 metres long circuit, where under unpredictable weather the 2013 champions were crowned in the last, extremely hard fought race of the 10th edition of the Euro.

SPECIAL – Tuners
The recent policies of engine manufacturers and more so Verstappen’s wins have given us the idea of checking, with those concerned, what the actual role of an engine turner is and whether this has changed or not over these past years.

CLOSE UP – Starlane Oxydia
Among the characteristics of the Starlane “action camera”: with fullHD definition, it’s waterproof and aerodynamic. 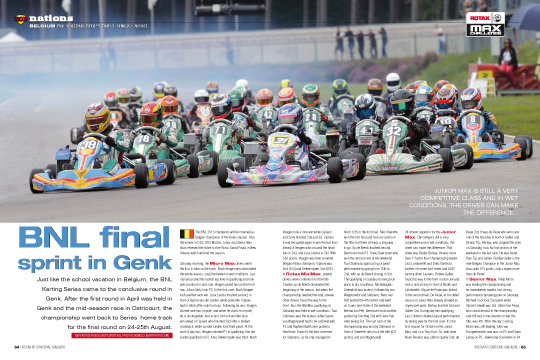 NATIONAL RACES
With the racing season almost over, we report the final round of the BNL Karting Series from Belgium, the last round of the successful NSK Series from France, and the Canadian National Championship held over a single round at Goodwood Kartways. 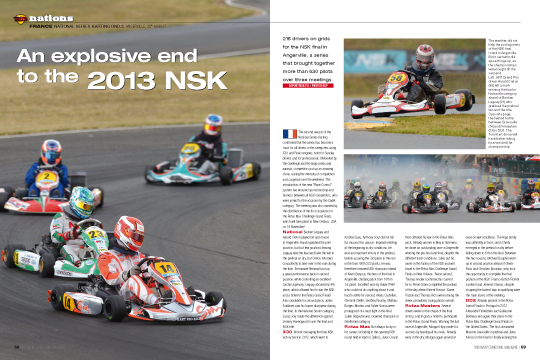 COLUMNS – Mondokart, VroomMama, November/December National and International race calendar
The news section opens up with International Race Director Alessandro Ferrari’s visit to the fantastic circuit in Belgorod, stage of the Russian Championship. Two very successful international organizers, RGMMC Establishment and Formula Kart Productions, are already out with the 2014 race schedules and programs. The North of Ireland Karting Association announced new prizes and awards for 2014. The Rock Island Grand Prix saw yet another successful event, with record breaking numbers.
In VroomMama we answer the letter from a young reader.
We wrap up the issue with the November/December national and international calendar.