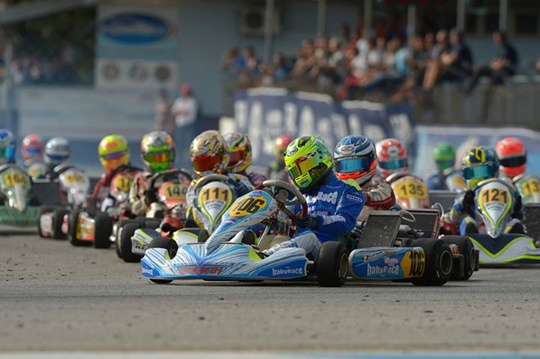 Press Release by: FIA Karting
Following a meeting marked by changing weather conditions, the Italian driver Leonardo Pulcini won the final of the first event of the CIK-FIA World Championship for the KF Junior category at Sarno (IT) in the presence of more than 80 motivated competitors. At the same time, the Polish driver Karol Basz won the CIK-FIA International Super Cup for the KF class.

It is impossible to take stock of the weekend without mentioning the Neapolitan rain that drenched the Circuito Internazionale Napoli during the qualifying heats to the point that the competition had to be suspended on Saturday afternoon, causing a major change in Sunday's schedule. Drivers needed to be fast in the dry timed practice, demonstrate fluency on a slippery and treacherous track in the qualifying heats on Saturday, finding their feet in the final heats on wet tyres while the track dried up on Sunday morning and finish on slicks while the grip was gradually returning in the finals. A difficult exercise that would select the most complete drivers.

With 82 competitors from 27 countries, the KF Junior World Championship certainly gathered the best hopefuls of karting in a competition that was very representative of the current high level. Timed qualifying revealed the sheer speed of the young Russian Robert Shwartzman (Tony Kart - TM - LeCont) who took pole position in front of the Indian Jehan Daruvala (FA Kart - Vortex - LeCont), the two Italian brothers Alessio and Leonardo Lorandi (Tony Kart - Parilla - LeCont) and the Brazilian Giuliano Raucci (Energy - TM - LeCont). But it was a British driver, Daniel Ticktum (FA Kart - Vortex - LeCont) who took the lead in the competition after the qualifying heats, with his four wins in five races. Although Shwartzman was second, one could not but admire the performance of his compatriot Nikita Sitnikov (Tony Kart - BMB - LeCont) who was 3rd in the rain. Daruvala confirmed his form with fourth position ahead of another British talent, the European Champion Lando Norris (FA Kart - Vortex - LeCont).

Under the current race schedule, both prefinals also had a qualification role as only the top 17 of each of them got their place in the final. Some notable competitors did not get through this stage, however, the drivers could be comforted by the potential they had shown. Alessio Lorandi managed to take the advantage against Raucci, Pulcini, Daruvala and Norris. Under a mild sky, the final was to be superb. Norris and Daruvala were held up by a crash just after the start, but Lorandi and Pulcini were immediately beginning a long duel punctuated by several lead changes that eventually rewarded Pulcini, who won by only six tenths of a second ahead of Lorandi. Shwartzman returned to full speed behind the two men to climb on the third step of the podium from the eighth position he held after the first lap. Ticktum finished in fourth ahead of the British driver Enaam Ahmed (FA Kart - Vortex - LeCont) who had begun the event laboriously. The drivers in this World Championship will meet again in late November in Bahrain, along with the protagonists of the KF category for the second and final round of this global challenge that will reveal the names of the 2013 Champions.

In Sarno, the KF drivers were competing for their International Super Cup, a competition in which the high level compensated for the relative small size of the grid. The Polish driver Karol Basz (Tony Kart - Vortex - Vega) dominated the race from start to finish, but it didn't mean his opponents missed their chance to challenge his supremacy. In qualifying, Basz took pole position from the Canadian Lance Stroll (Zanardi - TM - Vega) and the French Paolo Besancenez (Tony Kart - TM-Vega). Matteo Vigano (Top Kart - Parilla - Vega) then won the first heat in the rain, Basz regained the lead in the second, but Stroll won the last on his own. In the prefinal, the Dane Nicklas Nielsen (Kosmic - Vortex - Vega) clinched second place behind the Pole but the Russian Egor Stupenkov (Energy - TM - Vega) almost got the better of him. During the final Nielsen gave everything against to Basz, ahead from the start. The two men shared the lead in the race for ten laps and the result was decided at the last corner, Basz managing to win a few meters from the finish line. The Croatian Martin Kodric (FA Kart - Vortex - Vega) took the third step of the podium, and the French drivers Dorian Boccolacci (Energy - TM - Vega) and Paolo Besancenez completed the top five.