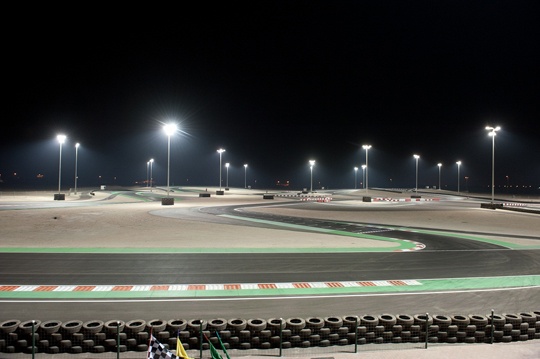 CIK-FIA U18 World Championship and Academy Trophy
There has never been a Karting World Championship held in the Middle-East. And neither has a major CIK-FIA international calendar event been organised at night under spotlights. It is therefore two new sensations that the competitors entered in the CIK-FIA U18 World Championship and Academy Trophy will experience from 8 to 10 November in Bahrain. And it is also in this context that two still very open championships will be settled. The guarantee of suspenseful racing!
Just like Formula One and MotoGP, Karting will discover the joys of a competition at night. Perfectly lit, the international circuit of Bahrain built in the Sakhir desert will indeed be the setting of the final round of the U18 World Championship (for Drivers under 18 years old). It is on Saturday 10 November at 21h10 that the start of a decisive Final will be given. After the Braga and Angerville events no Driver has indeed managed to take a definitive advantage in this competition in which all the participants utilise the same engine, placed at their disposal free of charge by the FIM company.

Outrageously domineering in Portugal, Britain’s Henry Easthope (Sodi) suffered in France the supremacy of the Frenchman Anthoine Hubert (FK). Separated by only 5 points both Drivers will therefore arrive in Bahrain with a slight mathematical advance. But, in their immediate wake, the Monegasque Charles Leclerc (ART GP, 11 points behind Easthope) and the Briton Ricky Collard (ART GP, 16 points behind) can also foster quite legitimate ambitions.

Limiting the title race to these four young Drivers would however be a mistake. With a maximum of 75 points still at stake, several outsiders could benefit from the glorious uncertainty of sport to come from nowhere and eventually don the world crown. The Dane Martin Mortensen (FK), the Australian Joseph Mawson (Top Kart), Italy’s Federico Savona (Top Kart), the title holder Matthew Graham (Zanardi) as well as France’s Hubert Petit (Sodi) and the Brit Ben Barnicoat (ART GP) all showed at the beginning of the season that they could compete at the front. And although they may have somewhat lacked success they want – as a minimum – to finish the year with a flourish.

Academy Trophy: Lappalainen ideally placed
In addition to the U18 World Championship, Bahrein will also host the final round of the CIK-FIA Academy Trophy. Since nothing has been settled in this category either, both Races scheduled for late Saturday (at 18h20 and 20h30) promise to be thrilling to follow! Finland’s brilliant representative Joonas Lappalainen is leading the competition, in particular thanks to his Portuguese success obtained further to a legal decision. Although Joonas has therefore still not crossed the finish line in the lead, his regularity at the front (his worst result being a 4th place) enables him to have a 16-point advantage over the Spaniard Javier Cobian, also very regular but never having yet climbed on the highest podium step.

With 100 points remaining to be distributed, George Russell knows that he can fill the 36 points gap that separates him from the leader. This time the Briton, double European KF3 Champion, will however have to achieve the success which he lacked in the first two events. At Braga, he had been betrayed by his starter while dominating Race 1. And in the Angerville event George never managed to display the same level of performance. He will undoubtedly be craving for revenge and hoping that both his main opponents are unable to step on the podiums.

Winner of the very last race in France, the Italian Mattia Drudi will be aiming – unless there is a major twist of events– at the final podium, like France’s Paolo Besancenez and Erwan Julé. Laureate of Race 1 at Angerville, the Belgian Benjamin Lessennes will be determined to confirm his talent revealed at the end of August. We shall also keep a close eye on the very young French lady Adeline Prudent, at the gate of the Top 10 in the provisional classification after demonstrating that she is in a relaxed frame of mind against her male counterparts.

As was already the case for the final of the CIK-FIA World Championship organised at Macau, a live coverage of the event will be ensured on the www.cikfia.tv website. It will then be possible to see from everywhere in the world live and in full the Prefinals and the Final of the U18 World Championship, but also the two Races of the Academy Trophy. Not to be missed!