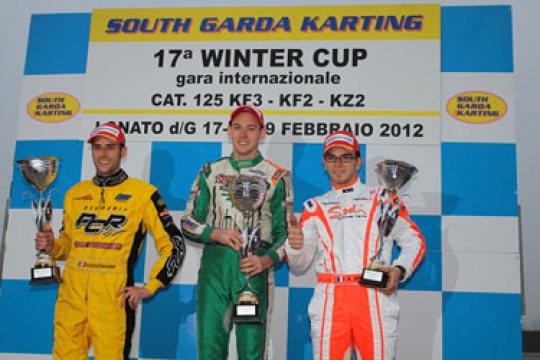 BEFORE THE RACE ARDIGÒ AND THONON WERE THE FAVOURITE DRIVERS IN KZ2 , BUT DREEZEN HAD THE UPPER HAND. VERSTAPPEN DOMINATES IN KF2 AND RUSSEL IN KF3, EVEN THOUGH THE RESULT IS "SUB JUDICE" IN THIS CATEGORY. GOOD DEBUT FOR THE YOUNG MICK SCHUMACHER

Lonato (Brescia), 19th February 2012. Also the 17th edition of the Winter Cup, which took place on the South Garda Kartingtrack of Lonato (Brescia, Italy) was a gripping one. It was one of the mosthard-fought events of these last years; a challenge with more than 273 entrants coming from the four continents for the first top level technical and sports contest of the season.
The top category, the KZ2, was the centre of everybody's attention. The result remained uncertain throughout the whole weekend thanks to the Italian Marco Ardigò (Tony Kart-Vortex) and the Belgian Jonathan Thonon (CRG-Maxter).
They both played as leading actors, but only as far as the beginning of the final phase. In the pre-final a light morning shower made the asphalt slightly wet. The change of the grip conditions pushed out of the race Ardigò, who crashed on the other Italian driver from Brescia Davide Forè (CRG-Maxter). The accident cleared the way for Thonon towards victory; he managed to win easily preceding the English Ben Hanley (Art Grand Prix-Tm) and the young Mirko Torsellini, also on CRG-Maxter.

In the final there was another dramatic change, with Thonon getting a 10-second penalty for a jump start and with the otherprotagonists who were able to elbow their way through, like the strong Belgian Rick Dreezen (Tony Kart-Vortex), who recovered from the sixth place on the starting grid and managed to get the lead of the race and to arrive first on the finish line, with a remarkable lead over his rivals. Arnaud Kozlinski (Pcr-Tm) managed to place second: he was always among the best. The third step of the podium was occupied by the French Anthony Abbasse (Sodikart-Maxter). Torsellini finished fourth after a great duel against his teammate Thonon. Also Ardigò recovered well from the back rows of the grid and finished fifth.

In KF2 the young Max Verstappen (Intrepid-Tm) dominated. He achieved the best performances since the qualifying heats, then he won both the pre-final and the final. Verstappen's greater rival was Antonio Fuoco (Tony Kart-Vortex) from Southern Italy: he deservedly achieved the second place preceding the Norwegian Dennis Olsen (Energy-Tm). Excellent fourth position for the English champion Tom Joyner (LH-Bmb), who preceded the other Norwegian Oystein Helgheim (Formula K-Tm) on the finish line.

In KF3 both the pre-final and the final were won by the English George Russell (Intrepid-Tm). In the duel for the second position, during the last lap,  Alessio Lorandi (Tony Kart-Vortex) tried an impossible overtaking on Danilo Albanese (FA Kart-Vortex). A contact between the two karts gave the Swedish RobinHansson (Energy-Tm) the opportunity to nick the second place. Lorandi, who eventually placed third, got a 10-second penalty and left the third step of the podium to Albanese. The Hungarian Martin Kodric (FA Kart-Vortex) placed fourth after an awesome recovery from the last rows of the grid. The Swedish Ilari Piispanen (LH-Bmb) placed fifth. Luca Corberi (Kosmic-Vortex), who raced in his hometown, placed ninth. Anyway, the KF3 result is still "sub-judice", because the team of the English Connor Jupp (Energy-Tm) appealed against the disqualification of its driver given by the race officials for technical reasons during the last heat on Saturday.

In KF3 there was also the debut of Mick Schumacher (Tony Kart-Vortex).He showed good progress throughout the whole weekend, but he was rather unlucky and got involved in two crashes in two different qualifying heats and in the second chance heat too. He was heavily penalized and did not manage to qualify for the final. Mick Schumacher entered this demanding international race using his mother's surname, Besch, and was directly assisted by Tony Kart. His debut was, after all, quite positive and his performances were considered satisfactory by the team, especially because he showed great determination during the whole event of Lonato.

All the results on www.southgardakarting.it